Modelcars of a record car in scale 1:43 start the last week of this blog before Christmas: An excursion into the world of fastest 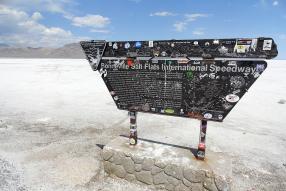 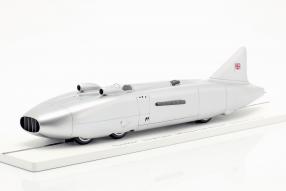 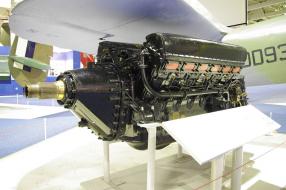 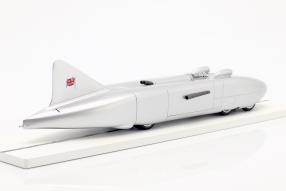 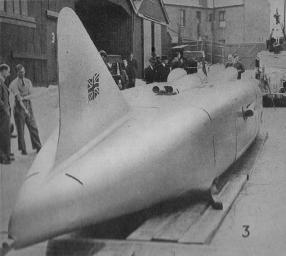 Now Christmas is approaching with full throttle and after we took it easy yesterday with the lighting of the third candle on the advent wreath, today we really want to step on the gas pedal again. For this we present the modelcars to George Eyston's eight-wheeled Thunderbolt II, with which he set a speed record on Lake Bonneville on August 24th, 1938. Spark has released a scale 1:43 model of this prototype built at Bean Cars of Tipton, which is quite a surprise for us: the company, which has expanded rapidly for its miniatures in motorsport, is adopting a prototype that is more likely to be found among collectors as niche models. All the more reason to briefly portray the facts, because they stand for a trait that is still deeply anchored in people: to be the fastest!

And to achieve the goal, the Lake Bonneville is the ideal terrain as a glance at the encyclopedia tells us: Great Salt Lake Desert describes an area west of the Great Salt Lake in the northern part of the US state of Utah. It originated towards the end of the last ice age as a result of the drying out of Lake Bonneville - a prehistoric lake that stretched west of the Rocky Mountains across much of the Great Basin and of which the Great Salt Lake is the largest remnant today. The Bonneville Salt Flats State Park also includes the Bonneville Speedway site; exactly the right level because the size of the area is also suitable for world and speed records. And on this the Englishman George Eyston competed directly several times with the role model for the Spark model - available under item number B1064!

Because on November 19th, 1937, the Briton was a guest there and set his first speed record on the Thunderbolt at 312.293 mph / 502.586 km/h in the countryside over the flying kilometers: It is started on the fly, which means that the cars are allowed to start up, but be measured on a defined section of the route on which the vehicle has reached its full speed. On August 24th, 1938, Eyston was again in the salt works to break his own record with a narrower Thunderbolt II at the front: 347.155 mph / 558.691 km/h were now on the clock. The following month was yesterday's snow: Eyston's compatriot John R. Cobb was faster. On September 16th, 1938, Eyston broke the record at 357.497 mph / 574.5 km/h for the third time before Cobb finally dominated.

The Englishman have had the hunt for speed records in the country under control since 1924; with one exception in 1928. The first record was set in 1898 by the French Gaston de Chasseloup-Laubat with a - read and be amazed - electric car; in France, the UK and the USA, drivers have since struggled to be the fastest in the country; in Bonneville since 1935. The Englishman Andy Green last broke the sound barrier with his Thrust SSC equipped with a jet engine on October 15th, 1997. Let's take a look at the drive of our three-axle model: The Thunderbolt II record car was powered by a Rolls Royce R. It is an aircraft engine that developed 1,920 kW / 2,600 hp from its 12 cylinders and 36.7 liters displacement and was built to hunt records; despite its weight of 744 kilograms.