ck-modelcars.de reminds with the modelers of the Team 7UP Jordan in scale 1:43 on the first races of the seven-time world champion 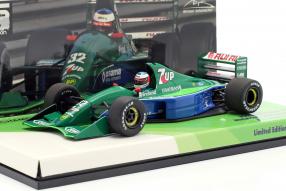 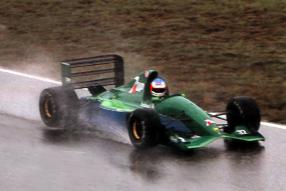 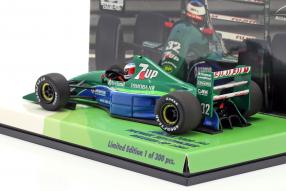 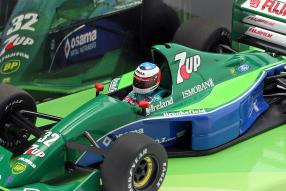 Friday, August 23rd, 1991, the first free training to the Grand Prix of Belgium on the mountain and valley railway of Spa-Francorchamps. With it: Michael Schumacher from Kerpen in Germany. Then a person, who was far away from the status of a world star, he should become: Seven world champion titles, 91 victories, 155 podiums and 77 fastest race laps should make the racing driver, born on January 3rd, 1969, in Hürth, the most popular man of his subject in the Formula 1, which is still highly revered to this day. Exclusively available at ck-modelcars.de are the modelcars of the Jordan 191 in 1:43, which was used by the Team Jordan Grand Prix and with which Michael Schumacher had his debut in the Formula 1: Place seven in qualifying let the potential divine that was in the German represented by Willi Weber.

It was the first year for the Jordan Grand Prix in the Formula1. It is not uncommon for drivers to change riders, but having a racer in jail for irritating a taxi driver in London is one of the rarer ones circumstances. Good for Michael Schumacher, because Norbert Haug and Jochen Neerpasch from Mercedes-Benz had the opportunity to participate in the mediation of the Kerpener in the premier class of motorsport. Designer Gary Anderson has designed the Jordan 191 by the then almost new Cosworth V8 with the identifier HB IV, which built on the original version in 1989 and had the development status of 1990. Manager Willi Weber was able to convince team boss Eddie Jordan von Schumacher, the money of the Stuttgart helped and Michael was allowed to take the place of the imprisoned regular driver Gachot.

He had no experience on the Ardennes course, but nevertheless Schumacher put the Jordan 191 on the seventh starting position. On the day of the first free practice, the 23rd of August 1991, the modelcars, which are available exclusively on ck-modelcars.de and available on 300 copies, of the racing car, which was produced according to the prototype without the advertising stickers of TicTac, had been only on the car at the race. Minichamps has delivered the miniatures of the starting number 32 from high-quality resin and brings to match even the same model ars in the decoration of the driver Bertrand Gachot and Andrea de Cesaris, the two regular driver of Jordan Grand Prix so, as well as the version of Schumacher's first race, However, because of a clutch failure after 500 meters ended and preceded the change to Benetton.