Under the hashtag tuesdaythoughts more or less relevant thoughts are published on the internet: On the occasion of this model, we also do some 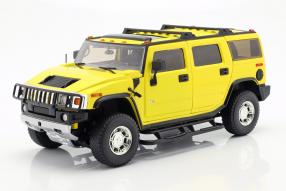 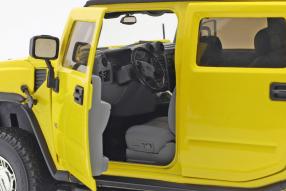 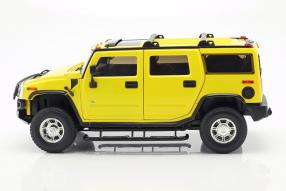 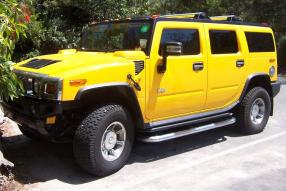 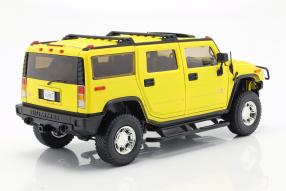 SUV's are under attack since the arise of the movement "Fridays for future", become heavily criticized because of their footprint and their fuel consumtion. Is it politically correct to write about modelcars of this species? To anticipate the answer: It is! There are reasons for this: First, for example the Hummer H2 model year 2003 is an impressive car - also in scale 1:18, as the US-label Greenlight has put him on the market last week under the item number HWY18015. The model matches the appearance of the role model, as it was used in the tv-series "Entourage", a Dramedy-series, to which the American channel HBO has released eight seasons from 2004 to 2011. It is about the Hollywood-career of the young actor Vincent Chase and his Entourage. Chase was embodied by Adrian Grenier.

His entourage - the term means something like following - is made up of friends and family members from Queens, New York, who help him navigate his new and unfamiliar world of Hollywood. The 96 half-hour episodes ran in Germany at pay TV station FOX. But now back to the modelcar. The second reason to write about it is that the diecast miniatures is an excellent model that is well crafted, has no high quality reason for criticism and therefore is not interesting for non-serial or film-savvy collectors. As usual with Greenlight, the miniatures offer a true-to-original interior design, a detailed engine compartment and thus all-round openable hoods and doors; Steerable front wheels included.

With the Hummer H2 GM wanted to enter the market of SUVs, the Sport Utility Vehicles, and to use the popularity of the larger military version H1, which is based on the design of the H2. The H2 was built in the period between the years 2003 and 2010 and offered in the original version 236 kW / 321 hp, which it developed from the eight-cylinder with about 6.0 liters displacement. Well, its average consumption of 23 liters per 100 kilometers is now really no longer up to date, but the modern SUVs now can that better. In 11 seconds, an H2 accelerates to 100; the peak is limited to 160. However, what we like so much about the combination of SUV and car in the movie is that it opened up an exceptionally attractive collection theme and Greenlight has emerged as a loyal supplier.

Without overstraining the collector with the product variety. The third reason, just to write about this SUV, reveals itself by looking at the actual conditions. A modelcar for an off-road vehicle from a movie at a time when young actors from the German film and television industry are committed to the environment. Many announce this on their Instagram channel and stand for the fight to the car. They like to overlook the fact that they are among the privileged people who are picked up for events and paid by the production companies for the filming. Do you suspect, what? Of course, mostly in a SUV, but at least in a sedan of the E-Class or Mercedes-Benz V-Class. We should therefore always remember what the car from Germany has made: A successful economy nation!