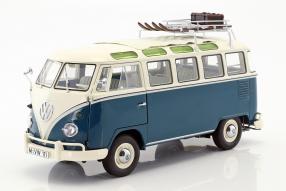 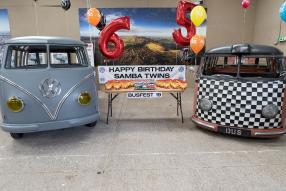 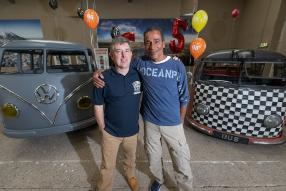 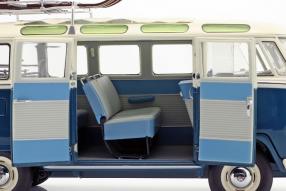 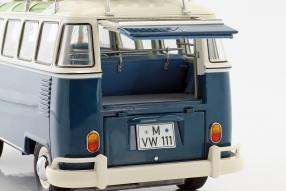 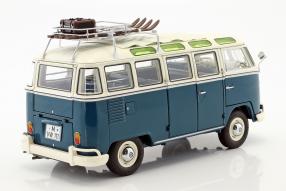 Actually, this article would be something for our rubric Throwback Thursday, but on the occasion of the announcement to the bus festival 2019 of the Volkswagen AG simply make a Throwback Friday out of it and ask for your attention for the twin couple from Wolfsburg: If one believes the historical weather records, the 6th of September of the year 1954 was just a typical late summer day. People went to work; many of them in the Volkswagen factory where the beetle was built. Some of these employees produced on this day a few T1a as a minibus special version with eight skylights and a sun roof - later called Samba bus. Two Samba of the day, which were exotics back then, have been sold to Denmark. Then their ways were lost. On the occasion of this news we would like to draw your attention to our Samba miniatures.

For the fact that the two Samba buses, built in 1957, now met again, is considered by the collectors as a small sensation. Almost to the day exactly 65 years after the production date of the two vehicles in Malvern - geographically located about 6:00 clock from the middle of England - the world's largest meeting of Bulli fans instead: the Bus festival. On board: friends and Samba bus drivers Rikki James and Andy Morgan. More coincidentally, at a club meeting some time earlier, they had discovered that the cars had both been produced the same day. They were twins, so to speak. That such twins meet again after such a long time is extremely rare. Because there are not many cars that get that old. And above all, because such vehicles are scattered over the decades in all countries, e.g. in the USA.

So it is hardly surprising that the two Samba buses were this year's highlights in Malvern. The story of both buses is crazy, because almost it did not exist today. Rikki James imported his Bulli from Sweden in 1996; Three years earlier, someone had parked him in a forest and left it to the flow of things. After his rescue, the T1a was elaborately restored. "Since then," said Rikki, "I traveled with nearly 100,000 miles with it through Europe." Andy Morgan found his samba in France four years ago. "When I bought my Samba, it was really bad," says Andy. But then he did his best to revive the car for this unique meeting of the twins. Although the two buses were produced the same day, their chassis numbers are 221 vehicles apart: 94.500 and 94.721.

But that was it back then, in a time with analog instead of digital logistics. The fact is: Today, Samba buses are the pins in the exclusive haystack of the unparalleled T1. Icons of automobile history. And that brings us to the many modelcars that have appeared on this subject. Above all the miniature in the scale 1:18, which Schuco offers under the item number 450037600 limited to 750 units, and our pictures show: A Volkswagen T1b Samba with winter sports equipment and faithfully finished interior, a detailed replicated engine or engine compartment and fully open tailgate and doors; also the big double door on the passenger side. The details are unique, as usual at Schuco. Of course, the look and the lines are exactly the same as the popular model.

Do you want more Samba? Click here to our general overview of all modelcars to this car