After the limited modelcar in the coloures of Shelby Cobra, Norev now also deliveres the exclusively made model for ck-modelcars in design of Scuderia Ferrari 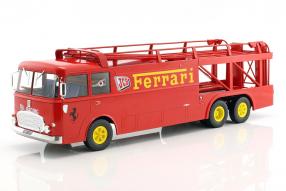 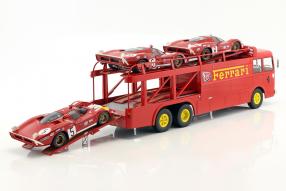 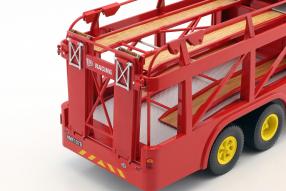 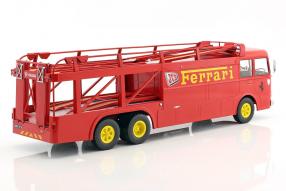 The first reactions were enthusiastic: the echo from the 1:18 scale Bartoletti racing transporter, developed and built exclusively for ck-modelcars by the french people of Norev, was overwhelming. The stock, which is limited to only 1,000 units of the model car, is melting down like the butter in the sun. No wonder, because with the unfolded loading ramps and thus a maximum length of 82 centimeters, the model car is such a great eye catcher, that it can stand alone, without having to be part of a collection. And for the fans who can not get enough of it, Norev and CK now submit the edition in Ferrari look; also limited to 1,000 units, with the same features and available under item number 187701. Let's take a look back at the history of this classic car, which is now in Germany.

The impressively well-made miniature reproduces the Bartoletti race transporter 306/2, a special transporter that is builds on a bus chassis of the Italian car manufacturer Fiat, the type Fiat 642 RN2 from 1956. Its 6.6-liter six-cylinder diesel in-line engine of Type 364A made at the origin of 67 kW / 92 hp. Coachbuilder Bartoletti delivered the new vehicle in 1960 to the Reventlow Scarab F1 Team. There it should be used in Formula 1, but the team went into bankruptcy. From the middle of the season, Lotus sent the Bartoletti to the racetracks. Then the transporter should be sold to the company Camoradi, which failed in the absence of cash also. In 1963, the Bartoletti racing transporter went back to the manufacturer before Carroll Shelby took over the car in 1964.

However, Shelby had to buy the truck an extra axle because the weight of the Cobra racing cars required it. Alan Mann Racing then used the Bartoletti. In the decoration of this team, the first edition of the model appeared, whose absolute eyecatcher are the unfolded 82 cm long loading ramps with wood imitation! If the collectors of the diecast miniature folds up the moving loading ramps, then it's 62 centimeters that the model car from Norev logs into the space in the showcase. The stands for the ramps are worth watching as well as the hinges and eyelets, because all this testifies to loving detail. Turn signals, exterior mirrors and the railing on the right and left of the loading area are very well made in terms of craftsmanship.

In 1969, David Piper became the owner of the racing transporter, which leased him to the maker of the movie "Le Mans" with Steve McQueen. For the local operation, the vehicle was repainted several times: in the colors of the Renault / Mirage team, then in the presentation of the Porsche / Gulf team and finally in the rich red of the Scuderia Ferrari. JC Branford bought the vehicle afterwards and used it in the color of the Italians for the transport of historical racing cars: Exactly in that optics the here shown model car is presented. After further ownership changes, it fell into the hands of Don Orosco, who invested 8,000 working hours and had the car restored to its original condition: Now powered by a 11.6 liter with 130 kW / 176 hp, the car was sold at the Goodwood Revival 2018 for 450,000 euros auctioned to the company Chrome Cars in Jena

Here: Click to the JCB Ferrari Bartoletti-Renntrasporter in our webshop