The team around Timo Bernhard had hoped differently for the race weekend at the Red Bull Ring. Collisions, defects, penalties, accidents and a restart were part of the weekend 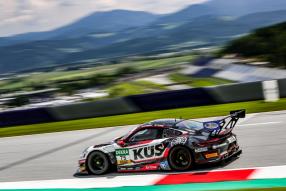 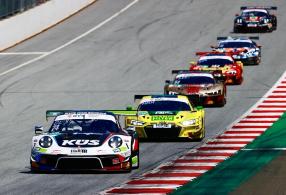 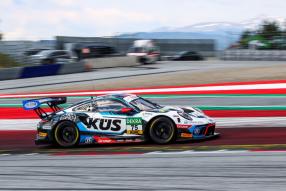 The KÜS Team Bernhard experienced a weekend to forget with the ADAC GT Masters at the Red Bull Ring in Austria: After the already disappointing Saturday-race, the reigning champion Christian Engelhart (34, Starnberg) and Porsche works driver Thomas Preining (22, Austria) achieved position 17 in the 911 GT3 R with starting number 75. The sister car with number 74 and Hannes Fitte (21, Langenhain) and Porsche contract driver Dennis Olsen (25, Norway) had to give up prematurely. Even in the very close qualifying - 24 cars were within a good second - nothing progressed. Christian finished 22nd, Dennis didn’t get past 24th. Championship points in the “League of Super Sports Cars” were almost out of reach.

A few meters after the start, the race was interrupted due to an accident with the red flag. The restart was made by Christian from 19th place, Dennis from 21st. When the pit stop window opened, Christian had improved to 17th, Dennis to 18th. Shortly before his own stop, Christian was turned around by a competitor and lost ground again. Thomas replaced him and fought his way up to 16th place until shortly before the end, the points were within reach. Because of an unfortunate collision, Thomas was given a drive-through penalty and he crossed the finish line in 17th place. The starting number 74 had to end the race early because of a defect.

#75
Christian Engelhart: “The race didn’t go according to plan today. After a very mixed qualifying, we were very far back. Then, I had a good start and drove up to position five, from then on it was an uphill battle. There were several accidents and safety car phases, the race never really got going. At the last restart the driver behind me made a mistake and turned me around, so everything we had won was lost. In the end, Thomas tried to make up places in his stint. He got involved in a collision and unfortunately no points were awarded because of the penalty. So this wasn't the weekend we had in mind. Now it is important to stick together as a team, get together and prepare everything optimally for the next race so that we can fight back stronger.“

Thomas Preining: “After the qualifying result it was clear that it would not be an easy race. The first stint didn't go quite according to plan, I had to give everything in my stint to move forward. It went quite okay, we were almost in the points. During an overtaking maneuver, there was an unwanted contact, for which we received a drive-through penalty. I had tried everything, unfortunately that was not enough today. Now we have to see how we can improve for the next race in order to be more successful there.“

Team boss Timo Bernhard: “It was a weekend to forget. Unfortunately, we weren't rewarded for a strong performance yesterday, but it didn't come together in qualifying today. From the back positions, both cars made good progress at first. Unfortunately, we then had to withdraw our #74 due to a defect. The #75 was turned around before the stop, so the whole race to catch up was ruined. Thomas tried everything afterwards, unfortunately he accidentally turned two cars around and received a drive-through penalty, so he stayed outside of the points."