With a colorfully designed model car Spark delivers a participant in the 24-hour race from the Nürburgring in 1:43 scale 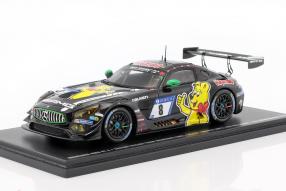 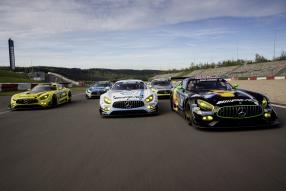 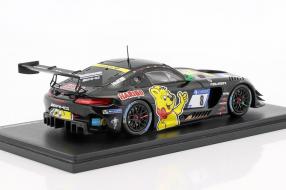 Who does not love them knows, the seductive-tantalizing sweets from the House of Haribo. First it was Thomas Gottschalk for a long time and now it is Michael Bully Herbig - the viewer can hardly escape advertising on television. But the brand is also established in motorsport: As a sponsor of the Haribo Racing Team Mercedes-AMG. The well-known racing driver Lance David Arnold and his colleagues Maximilian Götz and Renger van der Zande have been at the wheel this year to compete in the 45th ADAC Zurich 24h Race 2017 at the Nürburgring. The legendary event attracts crowds of around 200,000 people to make it as comfortable as possible along the Green Hell and pay homage to their heroes at the racetrack, which is steeped in tradition. Also the Haribo-Benz, to which Spark brings out a nice miniature in 1:43.

The team around Hugo Ripert of Spark is known to the fans as the premier destination for the production of model cars based on motorsports. The 24-hour race in the Eifel took place this year from 25 to 28 May inclusive. Around five months later, so the first model cars come to us: So also the Mercedes-AMG GT3 in the typical for Haribo livery with the Goldbär - the only Goldbär in this context, whose enjoyment does not make you fat! The pleasure is to listen to the eight-cylinder, whose sound at the racetrack caused a storm of enthusiasm. The car with start number 8 reached the finish line one lap behind and thus finished in the overall standings at a respectable ninth place.

Gold bear comforts: a long wait for the DTM

However, the model car deserves first place in the assessment of its quality, because as usual with Spark, new forms were created for this year's car. This guarantees that the new models accurately reproduce all changes in the details around the front apron, splitter, spoiler and printing. Of course, this commendable effort is also taken care of by the cars of the DTM, which - unfortunately - will take a long time to come this year. At the end of the season they were in the previous years, but now it is at Audi "late October" and other sources speak of "until Christmas." Let us be surprised and enjoy as long as not only on the Reformation holiday and All Saints' Day, but also a great Mercedes-AMG GT3, which does not make you fat and in addition to the model exactly corresponds in appearance and proportions: Limited to only 400 units.

Here: Click to the model cars of the Mercedes-AMG GT3