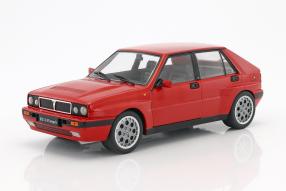 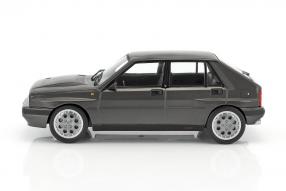 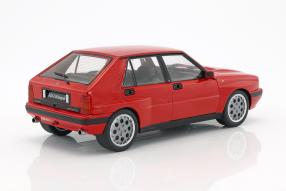 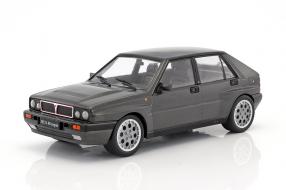 Manufacturers of Modelcars have to be clever now and have a sure flair for new topics. The fact that Youngtimer is currently in the trend and it is cooler in a car, which originates from the 1980er / 1990er-years, is well-known. Prerequisite: It should be a premium brand, whose logo is emblazoned on the vehicle, and as such, Lancia was quite a concept. Unfortunately, the splendor has long since faded away due to the mismanagement of owner Fiat, but in the history fascinating cars can be found, which also make a good figure on the road. To find such a model, today is also the task of the model launcher to reach new customers. Triple9 has achieved this with the Diecast miniatures for the Lancia Delta HF Integrale 1990 in an excellent way. And even at an absolutely fair price: Is it worthwhile to devote itself to this topic?

The Lancia Delta in its first generation was something like the answer to the Golf, only with better equipment and as an offer of a brand, which played in the Fiat Group about the role, like Audi for Volkswagen. Under the 831 series designation, between the end of 1979 and 1994, not only did good serial limousines, but also interesting offshoots with increased engine power emerged. The market has well accepted the delta based on the prolonged soil group of the Fiat Ritmo; In 1980, he was voted "Car of the Year" by journalists. The design came from the pen of Giorgetto Giugiaro, who created the look of the VW Golf I like. also the BMW M1, to which the delta is somehow similar; as straight as it occurs. The engines started with 1.3 or 1.5 liters and 55 kW / 75 hp and 63 kW / 86 hp. The sport was not originally intended, but that changed.

The prototype for our model came in 1989

Sporty engines entered the program only in 1982; the first turbo in 1983, the four-wheel drive in 1986. In 1987, the HF Integrale got the right loudspeaker, the thick jaws over the larger wheels, chassis upgrades and new aprons at the bow and stern. In the spring of 1989 appeared the model of our model car, a revised version called Delta HF Integrale 16V. The previously used engine has been equipped with a piston bottom cooling system and a newly designed 16-valve cylinder head and has now been equipped with 147 kW / 200 hp. 47 per cent of the engine power went to the front axle and 53 per cent to the rear axle. The most striking feature of this version was the domed bonnet.

First class: The details in the model

The space requirement of the 16V engine was different in height. Triple9 has translated the subtleties and peculiarities of this Italian cult car into a 1:18 scale, also the format of the first seven-inch wide wheels fits the look. Just as bodywork and lines are exactly the look of the model. Triple9 brings out two civilian versions as well as a motor sport variant, with which the drivers Didier Auriol and Bernard Occelli for the team Martini Lancia 1989 at the rally Sanremo started. Aurol is one of the four riders who won the rally in northern Italy three times. If you decide to give the Delta HF Integrale a place in your showcase and / or open a new topic, we can only congratulate you. Have fun with it!

Here: Click on the delta integrals in the shop