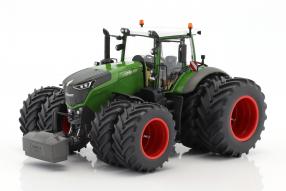 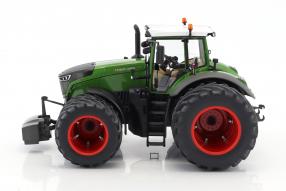 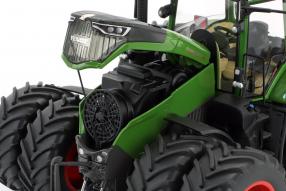 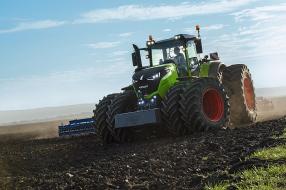 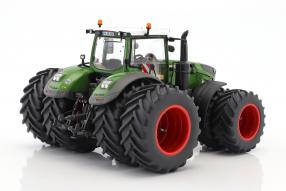 The day before yesterday it was a bus, today it is a tractor: Whoever believes, in our blog the commercial vehicle have broken out, it should be said that our heart is still the sports cars, sedans and racing cars. But people with gasoline in their blood can also be enthusiastic for PS-strong vehicles from other categories. Both the Mercedes-Benz Travego M and the Fendt 1050 Vario are apt to make our pulse beat faster because they are just as high-tech products as a BMW M5 or a Porsche 911 GT2 RS, which by the way, we've just received a new 1:18 model in black. A Fendt 1050 Vario with its 380 kW / 517 hp is already quite on the level of the power sedans from Ingolstadt and Munich or the sports car from Zuffenhausen. That's why we look at the Wiking model today.

Wiking has been known to collectors as a manufacturer of model cars for railways in size H0 for decades. One can almost say: they invented it. As the model of the Fendt 1050 Vario shows, Wiking is good at not only the scale 1:87, but also the size 1:32. Unlike the H0 miniatures, this tractor can even steers the front wheels and opens the doors and hoods. And what we see, that inspires us totally: down to the smallest detail pronounced model making. Apt and craftsmanship superbly processed in the appearance of the prototype exactly. That's how we know Wiking. Above all, the area of the cockpit with its instruments more reminiscent of a computer workstation inspires us, because Wiking looked around there particularly well. From the various levers to the touchscreen everything is in place.

Touchscreen? You read that right! Because it is not possible to control a 14 ton (curb weight) monster with its 12.4 liter displacement from six cylinders accurately to the millimeter without electronics. A special navigation system for field use helps to maneuver the tractor to the nearest two centimeters. While autonomous driving on the road is still in its infancy, it has long been everyday life in the fields of this world. Where no GPS signals are available, Iridium satellites help with orientation. More samples of the high-tech range complacent? Permanent all-wheel drive, a so-called grip assistant, an automatic tire pressure regulation system Vario Grip Pro as well as the ballast selection Ballast Select as well as a guidance system. A special gearbox controls the traction and prevents the Fendt 1050 from digging in the field.

Tractors of this size are quite individual beings: none equal to the other. Common to all is the tractor management system, the intelligent, automatic control. The driver uses a joystick to program speed and cruise control as well as waypoints; Via an API interface telemetry data of other devices can be played into the system. Air conditioning and coffee maker are also available. There are heat and cooling boxes. Similar to the Travego M-Bus that we wrote yesterday, the Fendt 1050 also impresses with its maximum torque of 2,400 Newton-meters (Nm), which is just 1,100 rpm. The MAN engine is supported by a VTG turbocharger.

Depending on the terrain, 15 kilometers per hour are in the field; the top speed is given as 60. The Fendt 1050 Vario is considered the strongest series tractor.It was presented in 2014, and was available for order at the end of 2015. At the end of 2017, the 1000 tractor of the 1000 series was built, to which the 1050 Vario belongs. The Vario in the name refers to the so-called VarioDrive powertrain; the latest version of the continuously variable Vario transmission. The mechanical four-wheel clutch only closes when slipping on one of the axles; the front axle is driven independently of the rear axle via its own hydraulic motor. As I said, a lot of high-tech that agriculture can count on. And Wiking has put a matching model on the fat twin wheels, which impress us more than any other tires. Incidentally, the height of the tractor is 3.6 meters; in length 6.2.