There was a surprise in the Top30 qualifying for the 24 hours at the Nürburgring. Is Glickenhaus the collection of the future? 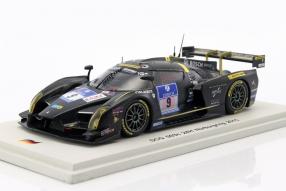 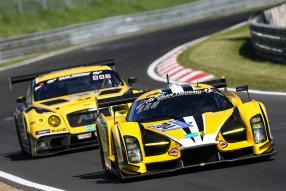 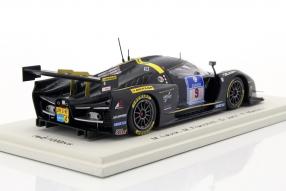 Audi, Mercedes-AMG, BMW and Porsche had to be under him: Dream Motorsport SA won the qualification and took the pole position for the world's largest race, as RTL nitro calls the 24h around the Nürburg. With a super-fast second round the US American Jeff Westphal has sensationally gained the pole position for the 45th ADAC Zurich 24h race and thus won the specially selected Glickenhaus Trophy. Westphal drove the fastest time in the top 30 qualifying session in 8: 15.427 minutes and will be on the grid twice with the number 704 from Saturday into the race at 2.30 pm. Beside Westphal in the first row is his countryman Connor de Phillippi, who in the Land-Audi with the number 29 in 8: 16.102 minutes was only 0.675 seconds slower.

The Glickenhaus corresponds to the car we already saw at the Nürburgring in 2015 and has launched a model car in 1:43 scale and a circulation of 1,000 copies under model number SG201. Only then was the racing car still dull black, today - 2017 - it is painted in conspicuous yellow somewhat life-threatening. There are still some pieces from the successor variant SCG 4/5 Competizione M16 from 2016. Still the topic is manageable and therefore suitable for beginners in the collection. James Glickenhaus was born on 24 July 1950, worked as a director and producer, before joining the investment firm of his father Seth in 1995. His passion for motorsport led him to his Team Traum Motorsport through a sports car collection and the privately financed development of his LMP1-inspired sports car.

Glickenhaus and Westphal to the pole position

Let's hear his driver, Jeff Westphal, for the qualifying session: "The lap was tough, I had a lot of overseeing, it was just like the whole thing or nothing, the first lap was pretty good, but there were a couple of places where it was Even better. " Westphal also secured the Gluckhaus Trophy. The Wanderpokal had donated 2016 his boss. Thus, the Teamchef had the pleasure of handing over the trophy to his own driver. "The 24-hour race at the Nürburgring is like Woodstock - a festival of motorsports" "says Glickenhaus. "I am proud that our team with pole position will become a part of this legend today." But 24 hours are long, let's see if the car can hold out. To see from 15:30 on RTL nitro.