The former design boss Patrick le Quément developed a timeless vehicle, to which the label Automobile presents a modelcar, limited to 999 units and in scale 1:18 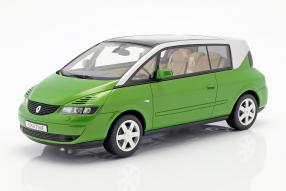 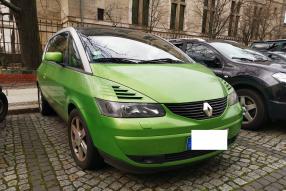 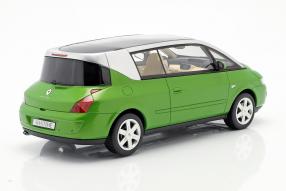 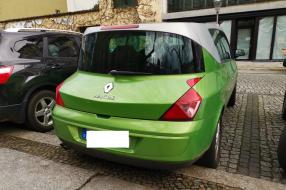 It may have been the first van coupe to emerge in the automotive industry, but its presence in the showroom only lasted for around three years: Renault introduced the Avantime, a futuristic mixture of van and coupe, in which the car next to the flatter line only gave two doors on the way. Only 8,545 units of the vehicle were built from 2001 to 2003. We sometimes meet one of them on the way to our lunch table: a real gem; an avantime in taiga green, in the color of which Ottomobile has now presented modelcars in scale 1:18. The just 999 units, which are delivered under the item number OT815 replicate the exclusive vehicle very well. Ottomodels dispenses with functional parts such as opening doors in favor of a razor-sharp, correct replica of the lines.

Introduced in November 2001, the Avantime was an offshoot of the Renault Espace presented at the end of 1996, on whose platform the Avantime with its galvanized steel chassis and plastic body was based. The elegant car was manufactured by Matra in Romorantin-Lanthenay, France. The Avantime offered two-tone paint as standard; above the base is the panoramic glass roof, which Ottomobile wonderfully traces with the modelcars. Passengers can take place on the leather seats by moving the 1.40-meter-long doors that swing forward on a curved track. As a result, no additional space to the sides was needed for these 60 kg monsters. The large tailgate of the timeless combi coupé, styled by Patrick le Quément, is no less voluminous.

The Avantime is powered by a 2.0 liter 16V four-cylinder petrol engine with turbocharger and 120 kW / 163 hp. The second petrol engine has a displacement of 3.0 liters. The V6, which is particularly susceptible to defects in the ignition coils, develops 152 kW / 207 hp and requires an expensive eleven hours to change the timing belt. Diesel customers were able to order the 2.2 liter version, which produces 110 kW / 150 hp. Renault decided to build the successor to the Espace with a steel body, so that the basis for a new Avantime was no longer available. As of the editorial deadline for this article, eight avantime will be offered on mobile.de (car sales portal); the middle six are priced between 4,000 and 6,000 euros. The Frenchman is not uninteresting for lovers of extravagant cars who have a soft spot for a grand appearance with sublime elegance, especially since rust is not an issue on the plastic body. Not on the model either!