Two new modelcars in scale 1:8 after their role model of the classic revival enrich the GT-Spiritmodels range 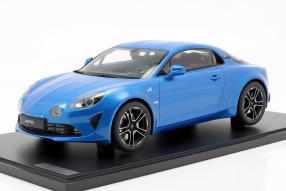 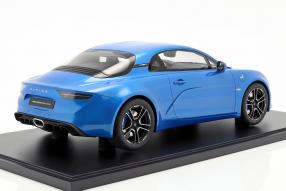 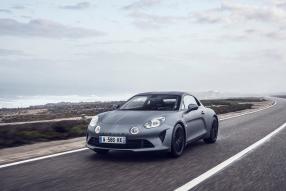 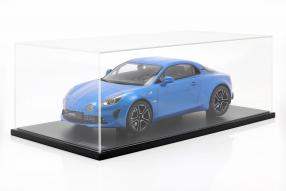 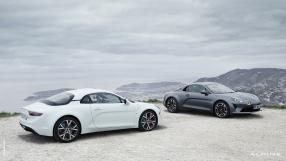 Already in the course of our reporting on the toy fair 2020 we met the format 1:8: Minichamps announced modelcars to the Porsche 964 as well as to Michael Schumacher's Benetton B194. The scale is not really new, because several years ago, Pocher Bausätze has delivered sports cars in this size. With innovations such as the brand new Renault Alpine A110, the segment is now being revived and offers collectors a spectacular alternative. Because the modelcars of the Alpine are definitely an eye-catcher: With an impressive 52 centimeters in length, the miniatures of GT Spiritmodels really impress every collector. As usual with this label, they are made of high-quality polyurethane resin and delivered in a large showcase. The A110 2018 is available in two versions.

GT Spiritmodels uses a real legend when it comes to choosing the model: At the 87th Geneva Motor Show in March 2017, the first model of the re-launched brand Alpine, the A110 was presented in the première edition. From the outside as well as the technical concept, the 2017 vehicle corresponds to the old A110 built between 1961 and 1977, which secured a place in the collective memory of all racing fans through success in rallying and on the circuit. Not only the appearance of the lines, but also details such as the double headlights and the rear end are reminiscent of the design of the predecessor, from which the lightweight concept and the arrangement of the drive set were also adopted. The mid-engine of the variant without “S” in the designation produces 185 kW / 252 hp from four cylinders and around 1.8 liters of displacement.

Supported by a turbo charger, the engine developes 320 Newtonmeter (Nm) of maximum torque to the seven-speed double clutch transmission. 100 are reached in 4,5 seconds; the top speed is limited with 250 kilometers per hour. With 4,4 seconds and a top speed of 260, the version A110 S is a little bit stronger because of 215 kW / 292 hp, but not the role model of the here presented model. This replicates the Première-Edition, of which 1,955 cars were built as a limited exclusive model. The version A110 pure comes with reduced weight, but unlimited purchaser; under the item number GTS80052 in 1:8 to the collector, but as the model limited to 199 units; as well as the Première-Edition (GTS80054). In terms of appearance, the eye-catchers, painted in traditional Alpine blue, correspond exactly to their sporty role models.