With two novelties to a racing car of the short-lived Group B enriches the label his offer, which is well-known for his detailed miniatures diecast 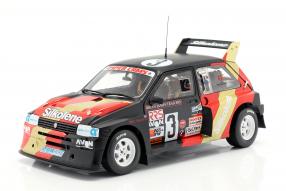 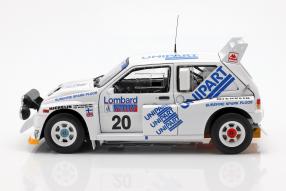 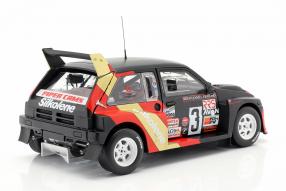 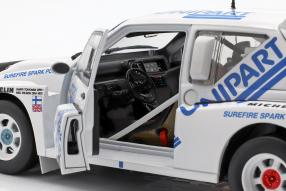 With the deliveries from Monday, two new modelcars from SunStar reached us in scale 1:18 of the type MG Metro 6R4, with its role model the team Austin Rover WRT with Harri Toivonen and Neil Wilson have competed at the Lombard RAC Rally 1986 as well as Will Gollop at the Rallycross-competition of the same year. The models with the starting numbers 20 and 3 are available under the item numbers 5539 or 5540 and make up the elaborately built racing cars highly detailed. And this for a cheap price, for which SunStar is also known among the collectors, as well as for the technically excellent workmanship and the execution of many details. Above all, it is worth taking a look under the bonnet in the rear of the modelcar, where you can find a magnificent reduction of the 3.0 liter six-cylinder-mid engine beyond. Let's have a look at the original and the model.

The FIA predicted in the early 1980s that it would only take a series of 200 street editions to homologate a vehicle for the new Group B. This enabled the manufacturers to develope small series of powerful racing cars, which had not many things in common with the advertised series cars or had been own cars. This also applies for the role models of our models of the MG Metro, which was originally designed for the Mini with front engines from 1.0 to about 1.3 liter of displacement and which ran off the tape from 1980 to 1994. Its racing version 6R4, however, mutated into a mid-engine monster with about 184 kW / 250 hp and a martial appearing wing, which has been perfectly recreated by the mold makers from SunStar. The cars of the Group B had been used at the Rally-worldcup of the years 1982 to 1986.

Nobody less than the specialists of Williams Grand Prix Engineering were responsible for the devlopement of the Metro R64; it was presented in 1985 and achieved at the Lombard RAC place 3 with Tony Paud, in November: "I know that it is a ugly beast, but the 6R4 is by far the best rally car, which I've ever driven." Useless, the assessment, because further success have stayed out because of engine-problems; in 1986 it was over anyway with the Group B, because the cars got the dubious call of beeing manageable for only a few drivers. Deadly accidents, also from Harri Toivonen's brother Henri, have marked the over for this category, to which also the Porsche 959 has counted. Back then, the modelcars were not very good to its legendary role models: Today, the miniatures shine with a finish that inspires!