The well-known brand of the Simba Dickie Group announces 180 new products for 2018 on 13 product lines and nine scales. Here: Highlights in 1:43 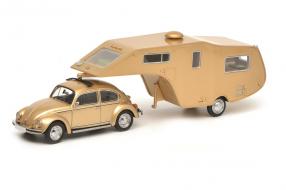 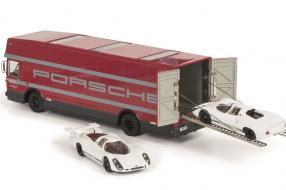 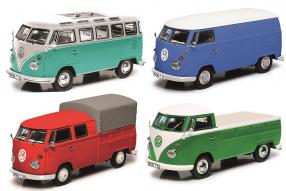 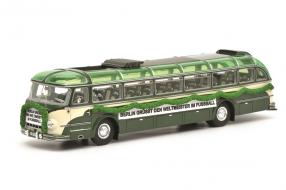 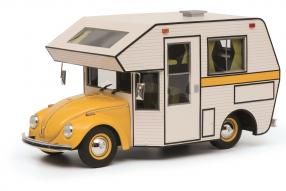 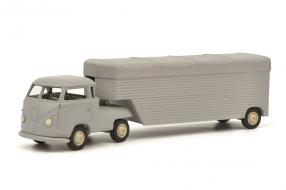 Last week, the industry turned its attention to the Toy Fair in Nuremberg. Of course, there was also the tradition-rich label Schuco, which announced a large number of novelties in the model car segment. It should be 180 in total. We are curious and look into the catalog. Innovations 1: What are the highlights? Which miniatures are we looking forward to? First, let's take a look at Edition 1:43, in which Schuco offers diecast models that are supplemented with plastic parts; the classic collector models in the world's most widespread scale so. 750 copies will appear from the BMW 507 in classic ivory. The Mercedes-Benz 300 SL Gullwing, which will come in the same quantity in medium blue livery, will fit in well in the showcase. Two evergreens - reissued.

Not less interesting but in smaller editions are the Mercedes-Benz 300 SL Roadster and the Opel GT in black or orange; each limited to 500 pieces. From the series "20 Years Porsche" the fans are surprised with a 356 A Coupé with two pairs of skis on the billboard. In green; beige, on the other hand, is the convertible version, which has been given a surfboard as an addition to the weather. Anyone who likes the pretzel beetle will be pleased with the burgundy version Summer 51, which carries a luggage rack with suitcases on the roof; Made 750 times. 500 copies includes the set Goggomobil sedan and pickup truck in blue or burgundy. Very popular among the fans are the models after the Volkswagen VW T1b, the Sambabus and the offshoots as transporter and flatbed. 750 to 1,000 pieces come in all variants.

Interesting workshop sets will arrive in 2018: For example, the Horex Regina in a set with a dealer truck, the Hanomag L28 in a limited edition of 500 pieces with driver figure. Schuco also announced a similar set to the Florid Kreidler spare parts service. Things get really big in commercial vehicles with the Mercedes-Benz LO 2750, which we have come to know as a costly but also very expensive model of CMC and which is now being announced by Schuco in the look of Reichspost; as a pickup and limited to 500 units. A set of "70 Years Porsche - 1948 to 2018" includes a Mercedes-Benz race transporter with tail gates to open, pull-out ramps and a Porsche 908 short or long tail. Limited to 500 copies only. As well as the truck and truck of Tatra.

Of course there will also be new tractors, for example from Deutz or Mc Cormick. More interesting, however, are the resin miniatures from the Pro.R43 series: the Aston Martin DB6 Shooting Brake, the Citroen SM Shooting Brake, the BMW 850i Cabriolet in two colors, the BMW M8 and a Porsche 911 Coupe, which we already have on offer; as well as the red 993 Speedster and the silver 993 Turbo S Cabriolet. A Triumph TR5 with an open Surrey Top - we might say Targadach - also comes in a closed version. A real hit is the model of the Volkswagen VW Beetle 1200, on the roof of a trailer is fixed. But there will also be current vehicles in this series: the sensational new Maybach 6 comes as a convertible and coupe; as well as the Maybach G650 Landaulet in two colors.

Will there actually be a FIFA World Cup in 2018? We think: Yes, and fits a great model car of that bus of Magirus-Deutz, with the winning team from 1954 was chauffeured in Berlin. The miniature of the O 6500 carries a floral decoration and corresponding greetings. It is also limited to 500 copies as the VW T1b race transporter Continental Motors, which will appear in red appearance. In the Resine series Pro.R18 some skurille motorhomes come to the delivery: For example, the VW Beetle, which has a Wohnaufbaum from the windshield. The VW Motorhome appears in different colors and enjoys an excellent detailing. The eyecatcher in a Volkswagen collection can be this 21-centimeter-long and 1,100-gram model cars in any case.

The Fridolin and the conclusion

The unforgotten VW Fridolin, however, too, because the miniatures to the utility cars to different post offices, such as the PTT and the German Post; Weighing 730 grams and 22 inches long. One thing is clear: Schuco has focused on the high core competency to bring really high-quality top models to famous models in presumably first-class quality on the market and thus to continue its success story. Any other news here is beyond the scope of this article, but our Twitter account will keep you informed of any incoming news as soon as it's received.