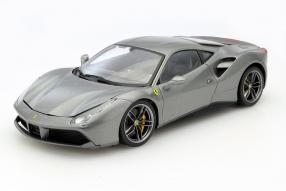 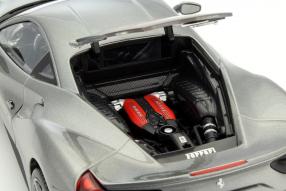 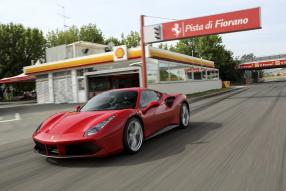 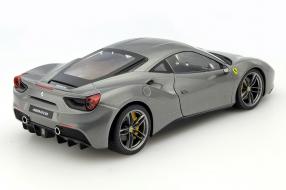 The Ferrari 488 is not unknown for the attentive reader of our blog. We have already reported on the model of car Bburago. Today, however, we focus not the time featured basic version Race & Play, but the model of the so-called Signature Series, which was upgraded to a couple of nice details. This in order to meet the demands of collectors who are attracted more to the more expensive miniatures of Norev, Kyosho and Minichamps as to those who make a good enough figure in the sandbox. Keywords figure: The making of the Ferrari 488 Signature Series in any case, because the color Grigio Titanio Metallizzato really suits him. The model car is made of die-cast zinc supplement with plastic parts and provides around opening doors and hoods.

The Ferrari 488 is the successor to the 458 and was introduced in early March 2015 at the Geneva Motor Show and the public facilities. The Ferrari 488 - GTB stands for Gran Turismo Berlinetta - is powered by a V8 engine with a cylinder angle of 90 degrees, which generated from the 3.9 liter engine 492 kW / 670 hp. The engine has 4 valves per pot and 2 IHI ??twin scroll turbocharger, intercooling and direct injection. 760 Newton meters (Nm), the maximum torque is indicated. In the acceleration of the 488 GTB sets with 3.0 seconds from 0 to 100 kilometers per hour and 8.3 seconds from 0 to 200 real peaks before. The maximum speed of - the interior equipped with lots of leather and Alcantara - 488 GTB is 330 kilometers per hour.

It is shifted via a seven-speed dual clutch transmission that channels power to the rear wheels. The aerodynamic characteristics of the 488 were significantly improved compared to the previous 458: Among other things, the output of large cooling air outlets in the hood, active dampers at the rear, turbulators could be increased to the underbody by 50 percent. A little bit of top-class technology we see the model of Bburago especially when you look under the hood: Toy detention as once the Ferrari F40 it is there no longer: Tricolor, with meticulously recreated carbon structures and taking into account all units of the drive set has been rebuilt , The body and its appearance vote anyway perfectly with that of the prototype. The dashboard and the seats are spotless in the shaping.

What are the differences?

The more expensive signature model features a blackened, sporty A-pillar and a matching umbrella. The replicas of the alloy wheels are identical in shape, but the GTB in black finish. Brake discs and calipers are better run when GTB, prototypical; the saddles are recreated in a sporty red. Meticulous and the taillights. A blade in the cooling air intake in the rear fender is black. Inside, the Signature 488 has better color-treated controls and red instead of black seat inner tracks, and thus two-tone seats. In the engine compartment also comes more color used; as the Signature has silver LEDs for the third brake light in the rear bumper. Our conclusion: Signature for the showcase, Race & Play for the offspring.