iScale brings a first thumbnail to the smallest SUV from Ingolstadt and delivers as usual a premium performance. Here: model and prototype. 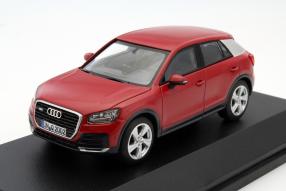 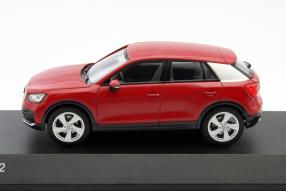 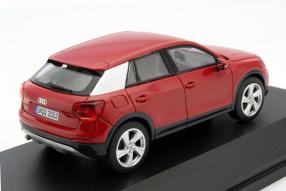 That amodel cars is made from a brand new prototype and do not know any predecessor, this does not happen so often. While the Mercedes-Benz GLC for example follows the GLK, in the new Audi Q2 is such a pioneer. The Q2 is the smallest SUV, the selling of the Ingolstadt carmaker and is based on the MQB platform; the same platform so as Audi A3, S3 and TT or VW Golf VII VW Touran II and VW Tiguan II. The Audi Q2 is progressively designed as a classic SUV hatchback and in the look as its next largest colleagues Audi Q3 and Audi Q5. Audi and iScale have now placed a model car 1:43 scale to the model available from autumn in the market, which starts in color tangorot and carries the type-specific two-tone paint, because the D pillar is silver separately from the rest of the internal vehicle mentioned type GA ,

And that's in excellent quality, because the label iScale indeed only since 2012 on the market, but emerged from the Kyosho Germany GmbH. Attentive readers of our blog know that the model cars from Kyosho with the best miniatures ever belong, because the finish of the bodies and the refinement of the details - almost - higher quality presented as the model. The small gaps at the opening doors and hoods have set new standards in modeling. Functional parts of this kind there is the Audi Q2 of size 1:43 naturally not because the bodies remain in this format almost every brand now closed. But the finish, which is known by the iScale models in 1:18, but is also found in 1:43. We think above all of the Audi R8 of the second generation.

But the makers of Ingolstadt should also be delighted with the quality of the Audi Q2. The proportions and the appearance of the model are met exactly. The inside of the headlights is a perfect model of the real light sources. Grille, glazing and transparent red tinted rear light clusters fit fantastic. Harmonious exterior mirrors and door handles patch round off the very successful presentation of the Audi Q2. The model is available with engines 1.0 liters to 2.0 liters. The smallest is a three-cylinder turbo with 85 kW / 116 PS; the top version, the TFSI petrol and TDI diesel engines with 2.0 liters of displacement, which give each 140 kW / 190 hp the same performance. To be a top performance, we also certify the Audi Q2 of iScale a Bestbenotung; accompanied by the anticipation of the colors Glacier White and Quantum gray.