Exactly 40 years after the first win for BMW at the 24 Hours of Daytona in 1976 celebrating 2 BMW GT cars racing Their premieres. And: BMW is 100! 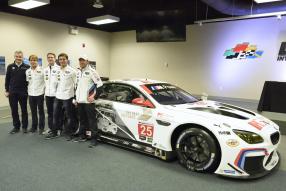 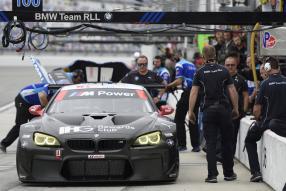 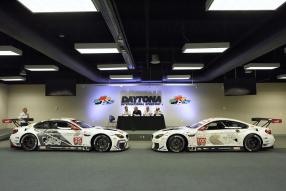 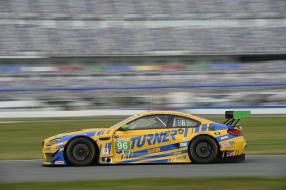 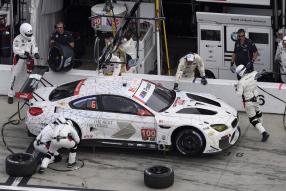 When researching to clarify any questions we stumbled across a piece of news that has immediately triggered a desire to purchase a model. Only, there is not a model to the prototype: Therefore, we call on Minichamps, Spark & ??Co to build it, the BMW M6 GTLM, the BMW Team RLL 2016 used in the GTLM class. A second version called BMW M6 GT3 is used by Team Turner Motorsport in the GTD-category. The two new vehicles to solve in the US from BMW Z4 GTLM or the BMW Z4 GT3, who celebrated numerous victories both in North America. Admit - of these cars you have nothing even heard it? Who of us in Germany already in everyday life these racing classes in the head?

The BMW Team RLL enters its 8th season together with BMW Motorsport: "It will be a historic year that will be marked not only by the premiere of the BMW M6 GTLM, but also the 100th anniversary of BMW." As a tribute to this extraordinary fact of birth of either BMW M6 GTLM will go with the number 100 in the new IWSC season. He is - as was the sister car with start number 25 - will receive a special anniversary design that was presented on January 27 at a press conference in Daytona. The 07 March 1916 applicable in the official corporate history as the founding date of BMW. What a year - is not only The Boeing Company in the US, but also from Munich BMW 100!

We are convinced that this date will occupy us even more often this year. But for now, back to the BMW M6: In order to bring the new car as soon as possible to the top of the manufacturers BMW, Chevrolet, Ferrari, Ford and Porsche high-caliber starter field in the GTLM class, sets the BMW Team RLL in continuity with the drivers. The master cast of the BMW M6 GTLM remain unchanged compared to last year. The cockpit of the # 25 share Bill Auberlen (US) and Dirk Werner (DE). They are supported in Daytona by BMW DTM drivers Augusto Farfus (BR) and the DTM champion Bruno Spengler (CA). In the second car with start number 100 come as in 2015 John Edwards (US) and Lucas Luhr (DE) used.

These two regular drivers are at the race in Daytona Graham Rahal (US) and the only new addition to the driver line-up - Kuno Wittmer (CA) - aside. Kuno Wittmer? Sounds like already Bruno Spengler for a German name; sounds, feels like, but are there bred Canadians. Turner Motorsport has 2 new BMW M6 GT3 in the GTD-class in the race. In the BMW M6 GT3 with starting number 96 works driver Klingmann (DE), together with Bret Curtis (US) contest the full season. In Daytona, the duo of Ashley Freiberg (US) and BMW DTM driver Marco Wittmann (DE) is supported. The starting number 97 share during the season as last year Michael Marsal (US) and Markus Palttala (FI).

At her side DTM driver arrived at the 5.730 kilometers long Daytona International Speedway in Daytona Beach Maxime Martin (BE) and BMW Motorsport Junior Jesse Krohn (FI) is used. The BMW teams and drivers feverishly opposed not only the race, but also rejoiced forward to experiencing the part of the project "Daytona Rising" comprehensively modernized course under race conditions. The season opener for the IMSA series ended on Sunday, 31 January by winning the driver Oliver Gavin, Tommy Milner and Marcel Fässler on the Corvette C7.R in GTLM class and John Potter, Andy Lally, Marco Seefried and Rene Rast Magnus Racing Audi R8 LMS in the GTD class. The BMW M6 reached the debut on the 5th (GTML) and 6th place (GTD). Modelers, it builds in 1:43 and 1:18! You're welcome!