With the GT3, Mercedes-AMG customer sports offer a similarly successful basis, as it has with the SLS AMG. Norev brings a model in 1:18. 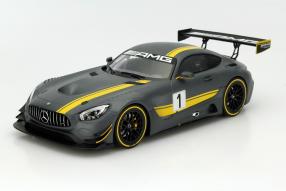 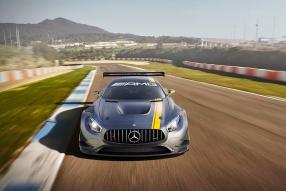 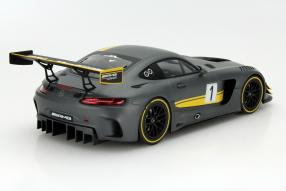 While the model carmaker at the International Toy Fair in Nuremberg pull, one after another, the cloths of the showcases with their hand patterns, Norev provide a model car of the Mercedes-AMG GT3 jointly developed with Daimler AG. Norev has already pulled the license for the first edition of the road version of the country and is in the prototype first shown at the Geneva Motor Show in 2015 also went to the pole position. Doors and hoods remain with this model car, with the paint designo magno selenitgrau, closed. But  it is definitely an eye-catcher for the showcase. The model is based on the chassis of the production car, but got a new front styling, the drastically different from that of the road model. The car looks more aggressive and is aligned in the grill on the 300 SL 1952 Carrera Panamericana, who won this.

The front thus oriented in designing their radiator grille as well as the Mercedes-Benz AMG Gran Turismo, which develops for the Play Station 3 and a 1: 1 study was presented. The wider body, the big air intakes, the diffuser and the huge rear wing are further distinguishing features to the street version: Any changes serve the maximum downforce and aerodynamic performance. The vehicle structure is made of a very light and extremely rigid aluminum spaceframe. The pilot is additionally protected by the stable carbon seat and an integrated roll cage made of high-strength steel.

Many parts of the prototype made of carbon

In order to reduce the vehicle weight on, bonnet, doors, front wings, front and rear aprons, side wall, side skirts, diffuser, trunk lid and rear wing made of very light and at the same high-strength carbon are generated. For the propulsion of the best from the SLS AMG GT3 and optimized AMG makes 6.3-liter V8 engine. The sequential six-speed racing transmission is mounted after the transaxle principle on the rear axle and thus enables optimum weight distribution. Another common feature is the almost completely made of aluminum double wishbones. These solutions, as tight racing and production technology are used at AMG.