With the model car to the race car of 2015er vintage Mercedes-AMG, also the car of Pascal Wehrlein debuts in 1:43 scale. 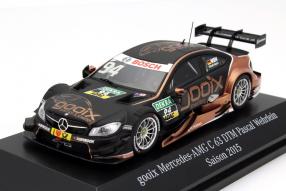 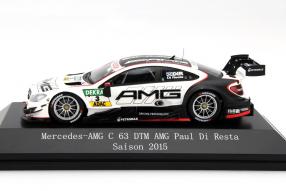 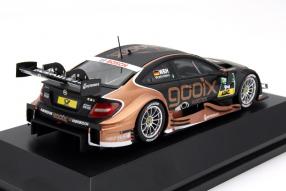 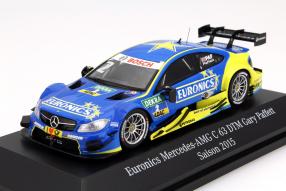 On 20 October of last year we have Pascal Wehrlein congratulated on winning the DTM 2015 and drew attention to a model car that was a role model even for the previous year's. Now Spark has updated us and delivered the winning car of the last year's German Touring Car Masters 1:43 at the offices of the brand with the star. Of course, in advertising package of the house and not alone, because the race car colleagues were part of the delivery. Compared to the previous models subtleties have been changed, such as the air intake and the front splitter on the sides. As usual, the team of Hugo Ripert and Spark has redeveloped the molds for the models resine plastic for new born.

So we really have to do it with real innovations that correspond exactly to the design of year-old cars used in DTM 2015 look and feel. The model with the item number B66960397 is the winning car from Pascal Wehrlein after perfectly, the import total of 169 points in the decor of the team "gooix / Genuine Parts Mercedes-AMG". The Mercedes-AMG C63 DTM from teammate Christian Vietoris is to have a model of Spark under the article number B66960398 and ended the season with 56 points, only on the 16th place. Gary Paffett came with the Mercedes-AMG C to 63 DTM team "Euronics / BWT Mercedes-AMG" and reached 89 points the 9th Place; So a rank behind the eighth-placed Paul di Resta on the "Silver Arrow Energy Mercedes-AMG".

This secured 90 points; Worlds behind Pascal Wehrleins points haul. The model of Gary Paffett is listed under item number B66960396; that of Paul the Resta under B66960395. In order for the update of the collector's display when it comes to DTM is nothing in the way. The models are based priced at 59.95 euros. With the right race car it goes on opening weekend of 06 to 08 May 2016 Hockenheim los; 9 Events announces the implementing ITR eV until the final on 16 October. On the board of the association, the authorized representative Hans Werner Aufrecht and Hans-Jürgen Abt sitting here at this link is the aforementioned articles on Pascal Wehrlein yet available. the annual film as a video on this page, we place above you also fond. A good start to the week you want your ck-modelcars team.