Schuco presents a rich combination details and looks at a piece of car history: The the Kleinschnittger Werke GmbH in Arnsberg. 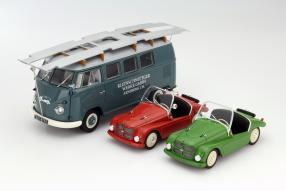 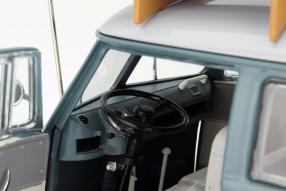 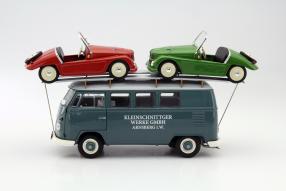 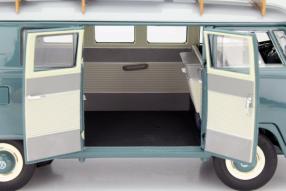 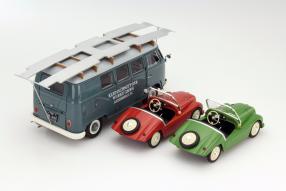 om Lykan Hyper Sport  to  the Kleinschnittger F125 - so starts our blog in the new week. Schuco won with a truly exceptional combination the title "Model Car of the Year 2014": The Fürther combined the model car Volkswagen T1 with 2 models of an almost forgotten mini-car, the Kleinschnittger F125. The eye-catcher made in 1:18 scale, die cast zinc, and in a strictly limited edition of 1,000 copies is convincing not only with his idea, but also with the execution thereof. Especially the famous VW Kombi provides the all-round opening doors utmost attention to detail. Technology details discover the fans behind the functioning tailgates. The paint has the T1 as a works car the native to Arnsberg Kleinschnittger Werke GmbH.

The Kleinschnittger Werke GmbH was founded in 1949 and in 1957 dissolved. With the fairly simple built F125, the company wrote automotive history but unconsciously, because with the ever built, small Roadster, a first 3.0 liter car was born. Today, the automobile manufacturer dream of  a so light and inexpensive sports car, but the demands on the safety standards of today make it seem impossible to get such a small car on the road. With the power of the past can now also no longer impress: The engine of the F125 Kleinschnittger contributed 4.41 kW / 6 PS and was brought back to life instead of a starter battery with a choke; such as with a lawn mower. The drive set itself was a single-cylinder two-stroke engine with 122 cubic centimeters, ie 0,122 liters.

Just get out and turn the car

After delivery by the ILO Motorenwerke Pinneberg  was built in front, so it was a front wheel drive. The three-speed gearbox via ratcheting circuit was connected to the steering wheel; on a reverse gear had to be dispensed with. But it was not a failure: The car was so light that you could just get out and turn it over. Can you imagine such a thing today to get out of a golf cart to grab him on the bumper and turn it over.

There were no doors, but only a low-cut side walls and an emergency cover. And shortly after the 2nd World War it was a good thing because the main thing was to be able to afford a car again. The streets were not the best; 70 kilometers per hour, which drove the F125 tip was therefore sufficent. Sayings such as "Time is money" was not known at that time.

The microcar then cost 2,300 marks, but the demands of customers rose as quickly as the economic miracle began. Until his attitude emerged 2,980 vehicles; A larger follow-up model was not well received, the company went bankrupt. Nevertheless, the little car has retained a place in the hearts of the classic car enthusiasts, like the beautiful video of Sporti1200 shows earlier in this article.

As the transporter from Volkswagen, so Schuco also has dedicated the Kleinschnittger F125 the full measure of attention and precisely implemented the lines of mini-car in the scale of 1:18. The paint, the chrome frame around the windshield; with and without aufpreispflichtigem mirrors. Indicators, seats, button-like taillights: A very good quality in model - the result is a very good set, which is an extraordinary eye-catcher on desks and in display cases and recalls the great period of reconstruction of Germany.