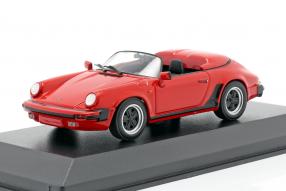 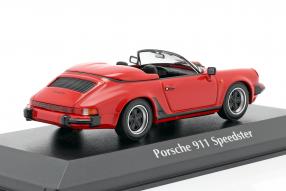 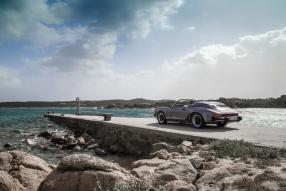 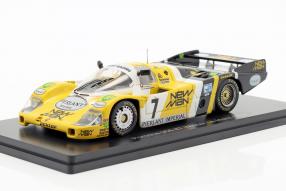 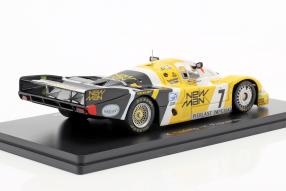 Strong modelcars from Altaya in scale 1:43, super sports cars at pocket money price, that was the topic in the blog yesterday. Let us stay a bit in the inexpensive category and switch to Porsche. As the collectors already know, Minichamps has created a product program for reissues with the Maxichamps-Series and relies there on models, which have run successfully before and still enjoy a large fan base. For this, Maxichamps presents wtih two modelcars the Porschd 911 Speedster of the construction year 1988 in scale 1:43 the reduction of a special series, of which a total of 2,102 copies were built in the model year 1989. The role model of the diecast produced miniatures with the item numbers 940066130 in Indian red as well as 940066131 in speed yellow had its debut at the IAA in 1987 as a study.

This had been developed on the basis of the Porsche 911 Carrera Cabriolet, which in turn celebrated its premiere as 911 SC in 1982 and actually was the first open Porsche, which came onto the market after an interruption of around 20 years. The 911 Speedster attracted attention with a shortened windshield frame and the top compartment lid over the rear seat area; underneath was a thin emergency roof. The six-cylinder boxer engine of the Speedster produced 170 kW / 231 hp from a displacement of 3.2 liters, as it has been installed since 1984. With a catalytic converter, it first delivered 153 kW / 207 PS, then 160 kW / 217 PS. Accident-free and well-preserved 911 Speedsters are available from around EUR 149,000 to EUR 200,000. The models trace the interior and exterior exactly. Based on the bellows bumpers, they can easily be classified as generation G models.

Let's switch to the racetrack: the New Man Joest Porsche 956B with its yellow and black paint job is one of the most popular endurance racing cars from the motorsport history of the Stuttgart car brand. The modelcars from Spark at the unique, singular and never recurring pocket money price with the item number CK58953 replicate this legendary racing car, with which the driver duo Klaus Ludwig and Henri Pescarolo from the New-Man Joest Racing team won at the 24 Hours of Le Mans in 1984. The miniatures are built from the high-quality resin and are delivered to the collectors in a display case and protected by the blister packaging.

The drivers and the team Joest Racing should propably never forget the course of the dramatic race at the Sarthe, because the Porsche 956 suffered from problems with the left suspension: The car always had to return to the pit. Nevertheless, the 956B with the starting number 7, driven by an approximately 346 kW / 470 PS strong 2.6 liter turbo engine, finished two laps before the second in front of about 150,000 spectators after 360 laps. The car had driven exactly 4,900.276 kilometers at an average speed of 204.178. Even if the models at around 10 Euros offer a very inexpensive opportunity to add a highlight to the Porsche collection, it does not mean that the fans or buyers have to make cutbacks on quality: get it!

Click here to the miniatures of the Porsche 956 by Spark