A businessman from China has fulfilled a special request. Great Lighting Models establishes a model carof it in 1:43 scale. 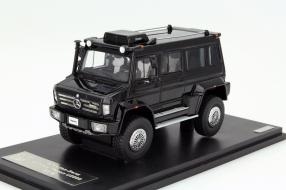 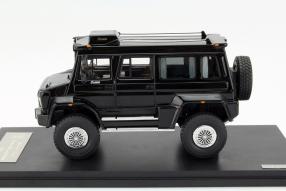 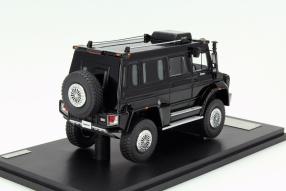 There are model cars, where even an inexperienced blogger has to look twice. For example, the model for the Mercedes-Benz Unimog U5000, that GLM (Great Lighting Models) would like us to have in our the display cases at home,is one such case, because the model is certainly one of the rarest vehicles on the planet. In current sales catalog from Mercedes-Benz, the car is certainly not to be found.

According to research result, the vehicle was probably built for a businessman from China and was offered in 2012 in Shanghai for sale. In cities like this, the operation of diesel passenger cars are not allowed, so that the SUV will not be long remained with its owner. Let's look at the model and the model of GLM Take a closer at.

Mercedes-Benz Unimog U5000 Wagon - the Prototype

The vehicle is powered by a turbo-fueled four-cylinder with 4.8 liter displacement and 214 kW / 290 hp. The maximum torque is specified with 810 Newton meters (Nm). Who, for example, once drove the VW Phaeton and VW Touareg V10 TDI with the know how strong pull engines with such a torque. Volkswagen had to provide 750 Nm.

The design of the Mercedes-Benz Unimog U5000 Wagon comes from the G-Class, such as doors and rear side sections plus roof easily give it away. For a quarter of a million dollars, the car should have been traded. Surely the ideal vehicle for the trip to the desert  rather than in the jungle of a big city like Shanghai. The 1:43 scale model on the other hand does not know dererlei restrictions. It also fits into all cabinets between Berlin and Aachen or Flensburg to Garmisch.

A highlight for every Mercedes-collection

Doors and hoods of the limited edition of 408 units resine plastic model remain closed, but the windows allow a great insight into the splendidly decorated interior. When watching dashboard, interior trim and two-tone seats held you can well imagine, during the day with the model to traverse the deserts around Dubai around and at night to park in front so the top restaurants in town.

Excellent work has done, which was founded in 2012 by a group of model car enthusiasts small series label GLM Build: Look once the scope of the A-pillar and admired the filigree mirrors or the silver carried sills and footboards below. The air conditioning on the roof, roof rails and the great wheels round off the good impression of the successful model