The miniatures, which CMR has released on the race car of the team from Erkelenz for the ADAC GT Masters of the previous year in 1:43, are only available at CK 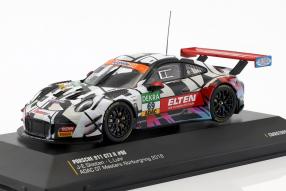 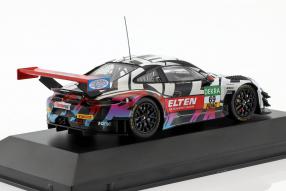 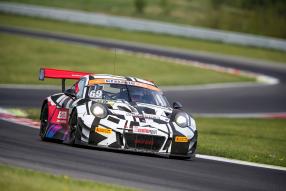 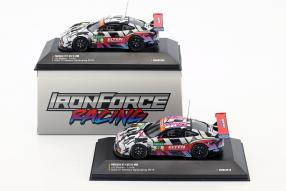 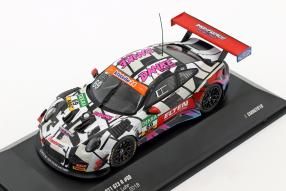 Iron Force Racing - real motorsport fans will be strong perked up. Why? More on that later! We stick to our theme of the week, the ADAC GT Masters, which starts into its 13th season in Oschersleben this weekend. With it: Our partner team KÜS Team75 Bernhard, our selling trailer and of course the Iron Force Racing team, which was founded by race driver Jan-Erik Slooten. Besides Slooten, the former FIA-GT1-World champion Lucas Luhr from Koblenz sits in the cockpit of the Porsche 911 GT3 R; last year as this season, where the driver pairing takes part on the league of the super sports cars for the second time. CK exclusively offers two modelcars to this, which were released out of diecast by the small series label CMR and originate from the production of IXO; no unknown brand for real motorsport fans.

But first a few words to the team itself, which has brought an exceedingly prominent supporter into the house and attracts attention with it: Jean Pierre Kraemer, the CEO of JP-Performance. The car tuner and presentator of several contributions on TV related to the car causes a presence of the team, which is passing many other teams easily and secure the pole in consciousness of the motorsport fans. A very clever move to properly publicize the name of Iron Force Racing. Anyway, we love JP and his manner to presentate his cars on TV for example. But how did the cooperation happen? Let's cite the homepage of Iron Force Racing and the explanatino contained therein, which basic thoughts had let to the collaboration of Jan-Erik Slooten and JP Kraemer.

In the back: The competence of Team Ring Police

"Jan and Jean-Pierre have often talked about the fact that motorsport is not what it used to be: real passion for cars, fun in competitive sports and, above all, a spectacle for the fans - and instead of just complaining the two of them decided to set up their own project, and both bring their teams and their skills to fruition: as Managing Director of Team Ring Police, Jan provides his crew and motorsport experience, while media professional Jean Pierre, as managing director of JP Performance with his reach, allows access to the fanbase and the sponsors.The aim is to join together as a team IronForce professionalism, closeness and fun in motorsport. Come with us at the racetracks! "

The explaining concludes with an invitation to specifically address the representatives of the team: "We offer you a look behind the scenes of motorsport and will bring the sport back to life." Make Motorsport great again! " That sounds really exciting, do you think so? Team Ring Police sells Akrapovic exhaust systems, is distributor and installer of Carbon Fiber Dynamics and MTM, offering full vehicle and part wrapping, custom vehicle paint and finish, powder coatings and accident car repairs. The portfolio includes the Swissvax Shop + Car Care Center. Enthusiasm for motorsport helps Slooten and his people to work for their customers. The modelcars from CMR to the team Iron Force Racing are available at CK for the start in two versions, out of diecast and in appearance no better feasible.