The ADAC GT Masters at the season start: Our friends around the team of Timo Bernhard were there. And also our top news, the modelcars from last year 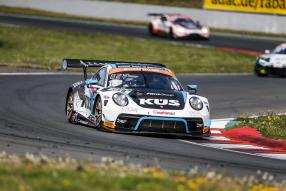 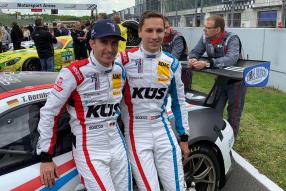 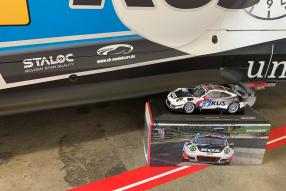 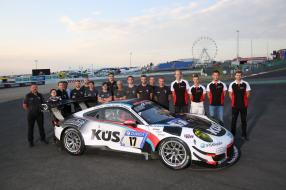 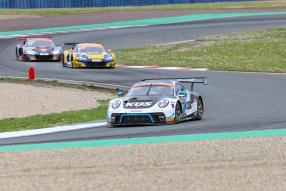 We all, so the KÜS Team75 Bernhard as well as us, the CK team, have waited for the season start like a little child to the christmas eve. And we were not disappointed, because even if the Saturday with its qualifying did not meet the wishes and expectations of the drivers Timo Bernhard (37), Adrien De Leener (29), Klaus Bachler (27) and Matteo Cairoli (22), the fans however got a perfect performance of exciting motorsports. On Saturday the fight between the leading Mercedes-AMG GT 3 and a Corvette made the race exciting; the race on Sunday was characterized likewise by light and shadow. The fans also had the opportunity to take home our top news, the modelcars of the Porsche 911 GT3 R of the KÜS Team75 Bernhard in the version of the 24 hours Nürburgring 2018.

What a Saturday: Marvin Dienst (22) in the Mercedes-AMG GT3 of Schütz Motorsport and David Jahn of RWT Racing with the Corvette C7 GT3-R pulled the enthusiasm of the fans up to the rain shaken up final phase, in which the Corvette has put pressure on the Benz for some time. In the end, Markus Pommer (28) and Marvin Kirchhöfer (25) won with the Callaway Competition Corvette. Sixth place went to defending champion Robert Renauer (34) and his new team-mate Thomas Preining (20) from Precote Herberth Motorsport in the best-placed Porsche 911 GT3 R. And our friends from KÜS Team75 Bernhard? They saved a point in the championship standings, because a catastrophic qualifying prevented a better result.

In the turbulent Saturday training session, which was interrupted three times with a red flag, neither Timo Bernhard in the Porsche 911 GT3 R with start number 17 nor Adrien De Leener in the sister car with start number 18 found a free lap. After a grid penalty, costing five places at Timo, the two-time endurance champion and Le Mans overall winner only started from 22nd place; Adrien von 27th. After the two mandatory pit stops, ex-Porsche junior Klaus Bachler in the No. 17 and Porsche Young Professional Matteo Cairoli made further catching-up. Despite adverse weather conditions with the starting rain shortly before the end, Klaus still saved a championship point with the 15th place; Matteo narrowly missed the points as 18th. And on Sunday?

A bright spot, but also a low point recorded the KÜS Team75 Bernhard in the Sunday race. While the start number 18 with Matteo Cairoli and Adrien De Leener finished neatly in seventh place, the start number 17 with Timo Bernhard and Klaus Bachler went out empty after a no-fault accident. In the morning qualifying it had looked promising for the team. In difficult conditions and wet track Matteo put the Porsche 911 GT3 R on the grid, Klaus qualified the sister car into fifth place. But the disaster took its course already at the start. Matteo received a five-second pit stop penalty for failing to correctly maintain his starting position. Klaus was trapped by several competitors and could not make up ground on the barely overtaking maneuver.

After the mandatory pit stop Timo attacked immediately, but was sent by a competitor in the tire pile. The "sinner" had been punished, but the race was over for the No. 17. Adrien, on the other hand, was able to complete his stint easily in No. 18 and finished seventh. Timo Bernhard: "Unfortunately, my race was over quickly when my frontman made a mistake while overtaking. I was already on the side, unfortunately he left me no room and pushed me aside, the car was so damaged that I could not continue. Too bad, because the day had started well for us with a strong qualifying." On Sunday Robert Renauer and Thomas Preining won on the 911 of Precote Herberth Motorsport.

In time for the season start in Oschersleben, Minichamps has delivered the last year's Porsche 911 GT3 R of KÜS Team75 Bernhard in 1:18, with which the team from Bruchmühlbach-Miesau had went to the start of the ADAC Zurich 24 hours race at the Nürburgring 2018. These modelcars are exclusively available at CK. The cockpit of the more than 367 kW / 500 PS strong nine eleven was reserved for the drivers Michael Christensen, Matteo Cairoli, Jörg Bergmeister as well as Andrè Lotterer. After 24:06:06,994 hours and 128 driven laps, they achieved a strong 21st overall ranking: From 147 started cars, 106 had been classified. Against this backround, the team around Timo Bernhard then also had every reason to joy. This is also offered with the miniatures out of deicast, which correspond in fnish and the appearance of high standards to what we demand on models from Aachen.

Here: Click to the modelcars of the KÜS Team75 Porsche 911 Nürburgring 2018