The miniatures of the VW Multivan in scale 1:18 by Norev convince with perfect contours and sophisticated details 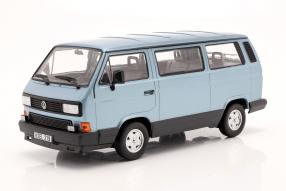 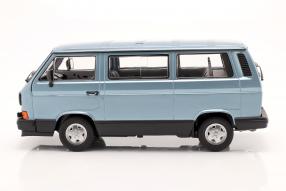 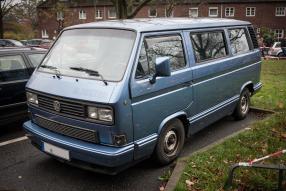 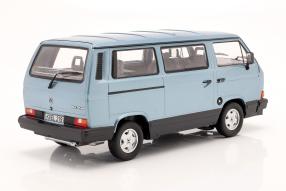 If the reader looks at the blog this week, he can come to the conclusion that the rear-engine weeks have begun at ck-modelcars.de: According to the reports on the Porsche 911 GT3 R of the team KÜS Team75 Bernhard and the two nine-eleven from Norev and KK-Scale, today it is the Volkswagen VW T3 Multivan from the model year 1990 in scale 1:18, which the editorial team of the blog would like to bring closer to fans of diecast miniatures: The last of its kind with a rear engine. The models from Vaulx-en-Vaulin come as a replica of one of the last versions of the third generation of the popular means of transport, which also began its triumphal march around the world as a bus. And this in a classy blue metallic, which we consider to be called Star Blue. The miniatures are listed under item number 188544.

However, it is not that clear which variant the modelcars represent. Actually, the writing Bluestar should be printed at the front of the miniatures, because in the points in which this maximum version of the T3 Multivan from model year 1990 was delivered, this miniature comes under the eyes of the collector: The 1:18 "invisible" equipment features like power steering we leave out at this point; What remains are reductions in the padded steering wheel, the apparently lowered body, the aluminum wheels with wide tires 205/70 R14 and - quite conspicuously - the rectangular double headlights and the plastic all-round paneling. Therefore, with these models, Norev not only depicts an ordinary Multivan, but apparently a top version at the upper end of the product range.

Just like Bluestar, Whitestar and Redstar, which Norev had already published earlier and in which the all-round planking is painted in the respective body color. The model cars presented here have in common the perfect reproduction of the lines and appearance, the lovingly worked out details of the interior and the perfectly matching transparent plastic parts for headlights and taillights. The interior is easy to see through the extensive glazing; even without opening the doors. For the model year 1990, Volkswagen installed the two-cylinder water boxer with a displacement of 2.1 liters and 68 kW / 92 hp and two in-line four-cylinder diesel engines with 51 kW / 70 hp and 42 kW / 57 hp. In the rear, where else: Just right for our apparent rear engine weeks.

Here: Click to the modelcars of the Volkswagen VW T3 Multivan