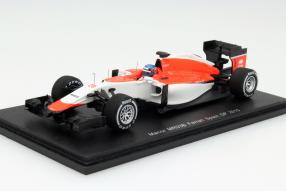 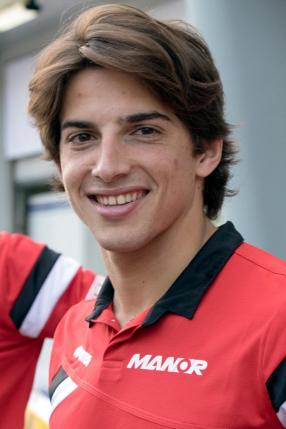 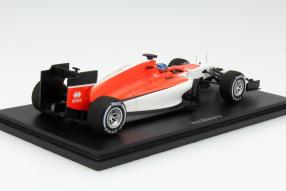 The Hugo Ripert launched and highly successful label Spark brings out, shortly before the summer break of the Formula 1 season 2015, the first model car of the current year, with the Manor MR03B. Spark designed according to the car driven by Roberto Merhi and Will Stevens in the Spanish Grand Prix, which was held on 10 May 2015 and was over 307,104 rounds. It was won by Nico Rosberg with his Mercedes F1 W06 Hybrid ahead of his teammate Lewis Hamilton and Sebastian Vettel in Ferrari.

Keyword Ferrari: The Italian team also provides the engines for the Manor Marussia F1, now we're back on the subject of the model of the car Manor MR03B. Behind the B hides a not quite so good History: Due to the insolvency of the Marussia team in October 2014, the team starts this year with a new team owner Stephen Fitzpatrick and the previous year's car.

Many compromising with Manor

A native of Northern Ireland entrepreneur took over the team, founded in 2009 and first time starting in the Formula 1 in 2010, in February 2015. Since the factory in Banbury has been sold to the new Haas Lola F1, Manor operates temporarily from the Middle English Dinnington. The car of the previous year was adjusted to the safety regulations of the new season and equipped with engines of development prior 2014

The V6 with the identifier Ferrari 059/3 makes about 440 kW / 600 hp. After a non-attendance at the start of the season the Manor MR03B brought no better placement than a 12th place finish at the British Grand Prix 2015; driven by Roberto Merhi, a debutant in Formula 1, who was born on 22 March 1991 in the Spanish Castellon de la Plana and in 2014 started in the Formula Renault 3.5.

Roberto Merhi was also in the DTM

But for Manor he’s a good friend, he competed for Manor Motorsport in 2009 in the Formula 3 Euro Series. 2012 changed Merhi over to the German Touring Car Masters, drove for Persson Motorsport a Mercedes C-Coupé and scored with a 11th place his best result. 2013 he moved to HWA and in the season opener came in tenth, earning his first points. At the Norisring he finished seventh. He finished the season in 15th place overall.

In the end a question: Should we, as a collector, have a model of the Manor MR03B on the shelf? Absolutely, because firstly, it is the first model to the season ever - Spark certainly had the advantage that it is a year-old car from existing forms - and secondly, the will to survive, the team distinguished, respect and is worth recognition. The Formula 1 will start after its summer break on Sunday, August 23, at Spa-Francorchamps.

And what’s new here? A great model car for Formula 1 car of Jochen Rindt in 1970, which we will report about here tomorrow.