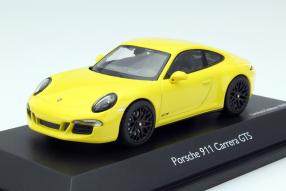 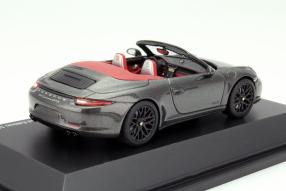 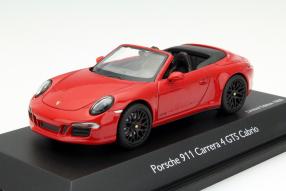 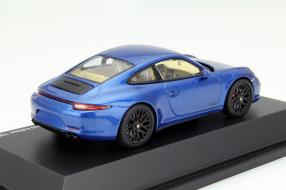 The model car producer Schuco has established itself alongside Minichamps as house supplier for model cars after models of the Zuffenhausen sports car label. Therefore the team from Fürth, Germany was allowed to build the advertising models of the 911 Carrera GTS. Schuco brought the body versions coupe and convertible to the shelves of Porsches accessories shops in January 2015. After only half a year the Traders models in the Schuco packaging are out, of course in other colors as the promotional versions. The GTS Coupé comes in jet black under the item number 450758200 and brings an attractive-contrasting, light colored interior. The second Coupé appears in Racing Yellow (450 757 200). The GTS Cabriolet debuts in stores in the colors White (450757600) and Agate Grey Metallic (450757700), each limited to 1,000 pieces.

The Porsche 911 Carrera GTS was presented in November 2014. The technically advanced and visually upgraded Porsche is positioned with its 430 hp between the 911 Carrera S with 400 hp and the race car-based model 911 GT3 with 475 hp. The new GTS goes from 0 to 100in 4.4 seconds. At 304 kilometers per hour is the Porsche at top speed. The body of the 911 Carrera GTS has been lowered by 10 centimeters. For 7140.00 euros extra, the sports car is available with all-wheel drive. The 911 Carrera 4 GTS Cabriolet costs 141,563.00 Euro, the coupe GTS 117,549.00 Euro. The model cars are of course cheaper. With 34.95 Euro, they are even well below the advertising models from the Porsche-accessories shop. In optic, the team of Porsche has been guided by the GTS models of other series.

The standard bi-xenon headlights of the 911 GTS are black edged. Even the mighty 20-inch wheels are set in silky gloss black in scene and equipped with central locking. That is something that is only in 911 GTS and has been well implemented by Schuco into the model. As standard, the GTS has a manually-shifting seven-speed transmission on board. The maximum torque amounts to 440 Newton meters (Nm), which originates from a displacement of 3.8 liters. The maximum speed of the motor are Porsche at 7,800 revolutions per minute; from the engine power of 430 hp / 316 kW is calculated as an output per liter of 113.2 hp / 83.2 kW per liter. The consumption is 9.4 liters of manufacturers with Super Plus on 100 kilometers. The tank holds 64 liters. The permissible total weight is specified with 1870 kg