Perfect for the end of the Formel 1 sommer break 2015 comes a wonderful model car that is reminiscent of the German World Champion Jochen Rindt. 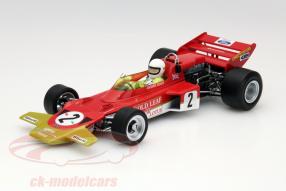 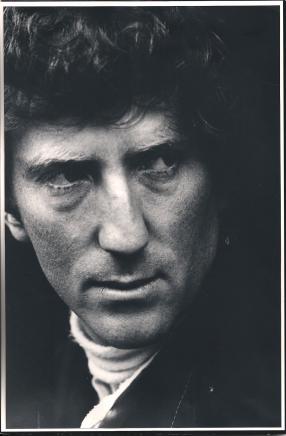 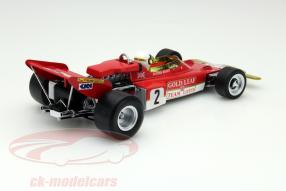 It is a sad record ,that keeps the memory of the Austrian race car driver Jochen Rindt alive. He was World Champion in the Formula 1 in 1970, but didn't live to see this triumph, because he previously suffered a fatal accident during final practice for the Grand Prix of Monza . His lead in the points table was so big that it brought him the title. Although  there was still 4 races held after Rindt's accident , no other driver that was in the race for the title was able to pass him in the points. To date, Rindt is the only driver who became World Champion posthumously. Jochen Rindt moved to the team of legendary designer Colin Chapman just a year prior. Quartzo revives the heyday of Jochen Rindt with a highly detailed model of the Lotus 72C 1:18.

Who is Jochen Rindt?

Ever since his start in motor sport, Jochen Rindt (born in Mainz, Germany on April 18, 1942) was considered an Austrian. This is mainly because Rindt grew up with his grandparents in Graz, Austria, after the death of his parents(who died during a bomb attack in 1943) . Also his licenses in motor sport were issued to him as an Austrian.  After good performances in the Formula Junior Rindt came to the Formula 2 in 1964 and 1965 to Cooper in the Formula 1, where he was hired as Bruce Mclaren's team-mate. A 4th place and 6th place were first countable results in terms of performance with Cooper. At the same time Rindt still drove in the formula 2; then most racers improved their income by competing in other racing classes. 1965 Rindt even won the 24 Hours of Le Mans in a NART employed Ferrari 275LM.

The time with the Lotus 72C

After two modestly successful years in 1968 and 1969, Rindt changed to Colin Chapman in 1970, at exactly the time, when adventurous wing constructions were build in competition for victories. Many pieces of these filigree rear wings broke, many, often serious, accidents were therefore a problem. Rindt's friend Piers Courage burned on  June 21st in the De Tomaso-Ford at the Grand Prix of the Netherlands in Zandvoort, that Jochen Rindt won,  the 5th  victory with the Lotus 72. On the 5th of  September 1970, during the final training session for the Grand Prix of Monza,  the right front brake shaft probably broke , whereby the car broke due to several twists and flips. The  model car from Quartzo , limited to 1,500 copies, reminisces on the unforgettable Jochen Rindt. The model engineers  acknowledge his achievements  and have designed the miniature with a lot of dedication.

The model of the Lotus 72C is well made

Not only does the car model accurately transmit the appearance of the model in the scale 1:18; No, especially the finish of the details an inspiration. At that time the engines were simply flanged only to the chassis and were more or less open. Therefore the Formula 1 fan can get an accurate picture of the optical characteristics of the engine block of the Ford Cosworth as well as the suction-trumpet and the exhaust system, but also the transmission is simulated in detail. The two coolers on either side of the cockpit are very beautiful. A lesson in the history of Formula 1 is in  the filigree axle designs and the fragile rear wing mounts. Quartzo has done (as already mentioned) a very good job. For 64.95 euros, the model can be yours under item no. 18272.