Minichamps and ck-modelcars have presented another set of two Formula 1 racing cars: limited to 99 units, scale 1:43 and unbeatable in the finish 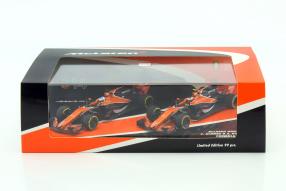 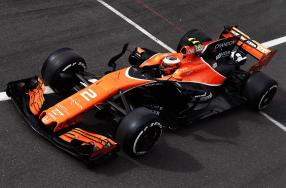 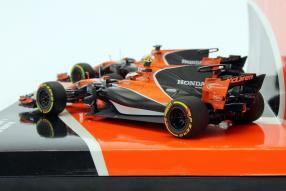 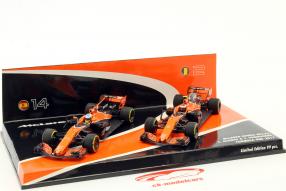 On the 23rd of August of this year, we introduced you to the first model cars designed after the prototypes of the current McLaren-Honda. The miniatures of the vehicles of Stoffel Vandoorne and Fernando Alonso have now appeared in a breathtakingly limited edition, as is only available at ck-modelcars. You guessed it already: The duo limited to 99 pieces is one of the already legendary special models that our company has made with selected manufacturers. In this case it was again Minichamps. The label from Aachen has made a two-car-set, similar to our double-pack of the cars from Force India, which appears in a large showcase and belongs to every collection for the Formula 1 season 2017. The miniatures reproduce every small detail and are made of Resine plastic.

Stoffel Vandoorne and Fernando Alonso may now remain a team after McLaren has made a change of motors for the next year. Thus the models, which we present here under the article number 572170214, are the last new releases of this team / engine combination. In the coming year McLaren wants to compete with Renault's engines. Not a bad choice, because the engine of the French is more successful than that of Honda, but the people of McLaren are better at building chassis: Today's Renault Sport F1 team was already the brand's brand until 2009, but from 2010 to 2015 by Genii Capital and under the name Lotus rather in less qualified hands; certainly not with the best people at the drawing board in the team. From the work with McLaren can also benefit the Renault-Werksteam.

But now back to the McLaren: Our Modellautos in the set correspond to the model of the McLaren MCL32, which for 2017 under the responsibility of the technical director Tim Goss originated. The vehicle is powered by a 1.6-liter V6 engine with an exhaust gas turbocharger; the Honda RA617H, which is coupled with a 120 kW electric motor. Switch is made with a sequential eight-speed gearbox operated with shifter shifters. Minichamps has brought the changes to the regulations perfectly to the model: wider tires and modified wheel suspensions complete the look of the now 20-centimeter wider body of the Monoposto, whose front wing has also grown in width.

Dito the wing at the rear, which was also mounted even lower. The cars look much cooler this year, right? McLaren-Honda is not quite as cool in the design evaluation: Six races before the season is the tradition so rich team with 17 points on the ninth place, before the final Sauber Ferrari. Mercedes-AMG, on the other hand, has 475 counters as the table leader. For McLaren a no-go, because with eight construkteurs and 12 Fahrertiteln, 815 driven races in the formula 1, 182 victories, 155 pole positions applies McLaren Racing Ltd. as the second most successful team after Ferrari. One more reason to continue to believe the team and to secure one of these outstanding well-made sets! McLaren and Renault will rock the Formula 1! We wish you a good start into the F1 week: Malaysia!

Here: Click to get to the set in the shop with video