Force India Mercedes is celebrating this year&#039;s debut in 1:43 exclusively with us. The miniatures of the VJM10 come from the production of Minichamps 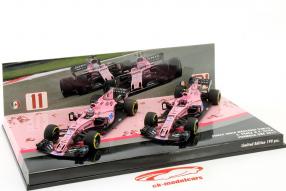 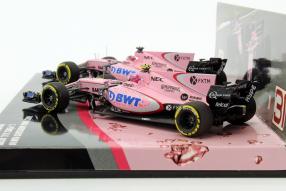 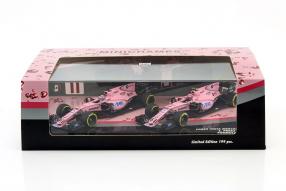 Friends and customers of our company have long known that we are launching special models in cooperation with the well-known manufacturers, which can only be purchased from us. With the two-model set of the models of the current cars from Sergio Pérez and Esteban Ocon, however, we have a made a very special coup, these are the first model cars of these two vehicles. At 1:43, Minichamps produced a two-piece set, which presents the two miniatures almost opulently in a splendid, wide showcase. It is clear that the Aacheners have once again meticulously taken the details and imprinted the models and delivered a work that leaves nothing to be desired. Esteban Ocon, who has made his debut as a Cameraman during the rain-conditioned waiting for the qualifying in Monza, will be pleased.

Sahara Force India - already as a team a world champion because it is the first Indian Formula 1 team at all. Its seat is in the British Silverstone. It was originally founded by motorsport icon Eddie Jordan, changed ownership to Midland and then formed Spyker before the Indian company Sahara India Pariwar took over the destiny of the racing team. With the 2009 season, Force India used Mercedes-AMG customer engines and has been working from ninth position in the Constructors' Championship to fourth place in 2016 ever since. The team, led by Vijay Mallya, is also currently holding. Andy Green is also responsible as Technical Director for the VJM10, which is a new development due to changes in the regulations for the current season: the car is 20 meters wider than its predecessor at two meters.

The height of the body has not changed, but the rear wing is 15 centimeters lower, so that the VJM10 looks like its competitors flatter. Sergio Pérez (number 11) is in the fourth season with the team, Esteban Ocon with the number 31 in the first year. Pérez is in eighth place after the Grand Prix of Italy with 58 on the seventh, Ocon with 55 points just behind. At the transfer of the waiting time to the qualifying in Monza, Ocon showed humor as he took a camera man's work tool and tried in this genre. He made it to fifth place in time, but was able to start from position 3 on the Red Bull penalty. We are pleased that we can offer this set to 199 collectors and fans of Formula One.


Click here: The two-car-set Force India 2017 in our shop