The American sports car is currently as successful as its predecessors in the 1960s. Maisto comes with a new model car in 1:18 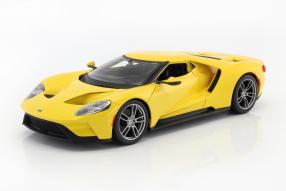 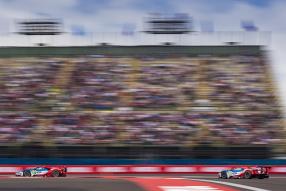 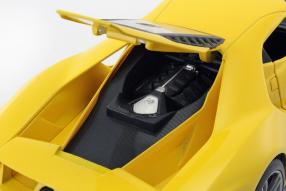 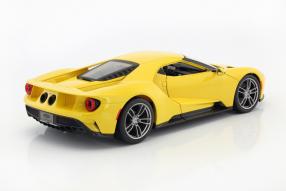 Last weekend, not only did Lewis Hamilton take the lead in the Drivers' Championship of the Formula One World Championship, but also Andy Priaulx and Harry Tincknell in the Ford GT with the starting number 67. The British cockpit crew is now 4th in the WEC -slipped confidently to the top of table. The WEC hosted the 6 hours of Mexico last Sunday on the Autódromo Hermanos Rodríguez of Mexico City. As the winner in class LMP1, Timo Bernhard, Brandon Hartley and Earl Bamber went to Porsche through the finish line. Today we stay with Ford as well as the Ford GT and look at the performance result of the traditionally rich Ford team on the occasion of the presentation of the yellow-colored model car 1:18 scale, following the model of the GT 2017.

After all, the American car manufacturer won the Le Mans 24 Hours race for four consecutive years with the Ford GT40 from 1966 and wrote it with the 40-inch-high Flunder racing history. A story that is written with the latest version of the game: Ford is in second place after nine of the world championship runners-up, nine points behind Ferrari. "We knew that the 6 hours of Mexico would not be a simple race for us," says George Howard-Chappell, WEC Teamchef at the Ford Chip Ganassi Racing team. "Our pace was not bad, but it was not enough to fight for the victory, but we were able to defend the lead in the rider's worth and limit the damage."

Ford at the 6h of Mexico

In the initial phase of the six-hour race on the 4.438-kilometer-long WEC course, Harry Tincknell and Stefan Mücke were directly behind each other in positions three and four. In the further course, Tincknell and his cockpit partner Andy Priaulx had to recognize in the Ford GT number 67 that they could not take the pace of the later top three. Concentrated and combative, they defended fourth place. For the upcoming races in Austin, Fuji and Shanghai, the Teamchef is expecting better chances. The race at the Circuit of the Americas in Austin, Texas will take place on Saturday 16 September 2017. Our yellow Maisto model launcher, on the other hand, is a type of victory that could not be better because it offers an unrivaled price / performance ratio. Particularly in view of the task posed by the exceptional rear of the model for a road car.

The model car is made of zinc die-casting and therefore offers all-opening doors and hoods. Under the rear fairing the collector can see a careful replica of the V6 engine, which has been supplemented by two turbochargers. The Twin-Turbo brings out its 3.5-liter capacity of 483 kW / 656 hp. It is switched by means of a seven-speed dual-clutch transmission, which transmits the 746 Newtonmeter (Nm) maximum torque to the rear-wheel drive. The top speed is given at 347 kilometers per hour; the acceleration from zero to 100 with 2.8 seconds. Maisto has transferred the intricate design of the tail to the 1:18 format, delivering a miniature, which seems to have been made with the same passion, which inspires the model on the racetrack.