Manufactured exclusively for ck-model cars the Lotus Renault E20 of Lotus F1 Team is celebrating its debut in 1:18 scale. Including a drunk with victory Kimi Räikkönen 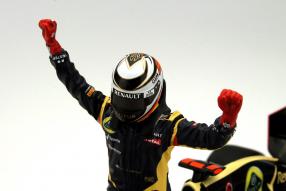 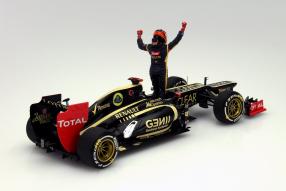 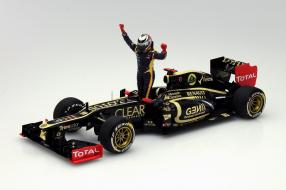 We really don't have to write any more about how Minichamps rebuilts models of Formula 1 race cars: Perfect in appearance and execution of its details, solid craftsmanship in finish and high detail in the technical details. Just like  the exclusive model of the Lotus E20 that  was made for ck-model cars  from Asslar only and had its debute in the shop on June 25th. The 1:18 scale model made of  die-cast zinc and plastic resembles the winning car of the Grand Prix of Abu Dhabi in 2012, which Kimi Raikkonen won on the Yas Marina Circuit on  November 4th; the race at the Yas Island was the 18th race of the Formula 1 World Championship 2012. Minichamps has the model car, including the driver figurine  which is obviously pleased with the victory.


This exclusive model with the item number 113120309 does not show  in the database of Minichamps, because it is only available through CK-model cars. Owner Christoph Krombach - who is currently  at FoS Goodwood Festival of Speed - has been given 500 pieces of them. The model car is available for 99.95 euros, a fair price concidering the circumstances. It offers  a driver figurine, which is very rare for Minichamps, authentic cockpit detail and steerable front wheels. The subtleties such as the hump in the front suspension has been taken on by   the team of the traditional modeler as well as the elaborate design of the front wing and the complicated-looking design around gearbox and diffuser. Very successful, is also the paintjob  of the Lotus E20.

Dates and facts about the model


The Lotus E20 had its debut on  February 5th 2012. It was constructed under the overall direction of James Allison, Technical Director of the team. The fact that it was the 20est  racing car from the factory in Enstone, gave it the name E20. It was the third car that was made  there, since the team is part of the group of companies of Genii Capital; the same company that  had their names painted  on the side of the racer. The colors stayed black/gold like in the times when Lotus had the same color as the  cigarette brand John Player Special. The transmission was a Lotus-made construction , fuel and lubricants supplied by Total. The engine came from the house of Renault and made 552 kW / 750 hp

The transmission was  development of the racing team. The KERS given by  Renault Sport F1 in collaboration with Magneti Marelli. Like all other teams Lotus also went to the start with  Pirelli tires . At the end of the 2012 season the Lotus E20 finished with 303 points on 4th place in the Constructors' World Championship;  207 points of that brough Kimi Räikkönen  third place in the drivers' ratings. The Lotus E20 put his driver  on the podium 10 times and led the Formula 1 field for 48 laps or 227.10 km . Räikkönen had his first victory of the 2012 season  in Abu Dhabi and the first victory for Genii Capital as a team owner. Lewis Hamilton led the race, but  due to a technical defect had to leave the victory for Kimi Räikkönen . So his  joy - even in 1:18 - is understandable