The German Touring Car Masters (DTM) will start this weekend perhaps the most popular to race fans. Audi is full of anticipation, Spark has right model cars ready. 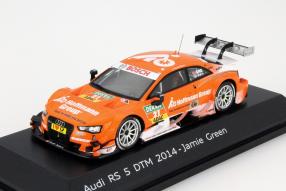 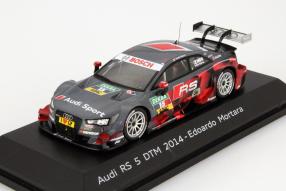 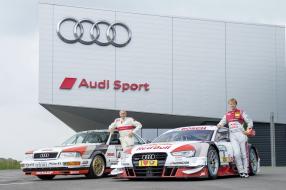 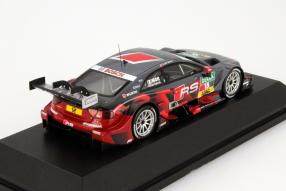 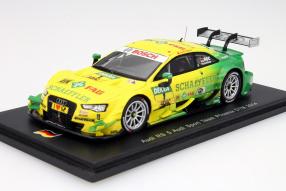 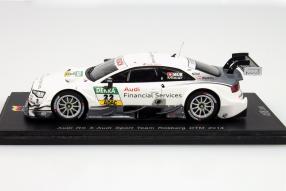 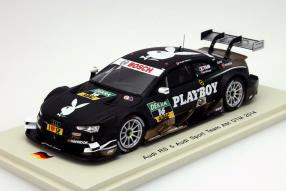 The DTM race at the Norisring in Nuremberg is like a  "home game" for Audi , since it's only about 90 kilometers away from its headquarters in Ingolstadt. The carmaker and its racing teams want to continue their winning streak  on June 27 and 28  in the DTM 2015 and continue retracting the Audi RS 5 DTM seventh triumph in a row. For  9 months Audi is unbeaten  in the internationally popular touring car racing series : Mattias Ekström (S) and Jamie Green (GB) have  won 3 of the last 6 DTM races for Audi. The current leader of the drivers' championship - Jamie Green - already celebrated 4 wins in Nuremberg and was second last year. Mattias Ekström was already  on the podium  for several times at Norisring and in 2013 crossed the finish line with his Red Bull Audi RS 5 DTM first, but was disqualified afterwards.


"Ever since then I have  some unfinished business in Nuremberg," says the two-time DTM Champion, who completed 5 DTM tests  last week with the Audi RS at the Lausitzring: "Quite clearly: I want to finally win at the Norisring. Cool is that we even have 2 chances this year, and already on Saturday  the many Audi fans get  a DTM race - and on Sunday  the same thing. With the retro design of my Red Bull Audi RS 5 DTM my only goal  can be the victory anyway." Ekström starts in Nuremberg on the occasion of the victory of the Audi debut at the Norisring 25 years ago in the colors of the Audi V8 quattro from 1990. In the colors of this original there will certainly be  a model car  which appears in the  2015 season. On the occasion of the DTM race at the Nürburgring, we will once again point out last years cars.


The ultrafast team of Spark has brought the cars made of resine  of the 2014 DTM season already  in March this year and brought  the starting lineups to the collectors showcases. The affordable model cars for now 57.95 euros a piece are available in their ususal extremely detailed design up to the last groove and completely redeveloped. They build every little delicacy in  form, appearance and coloring. Marco Wittmann on BMW won 4 of 10 races and became champion of the year 2014. With 156 points he managed a full 50 points more than Mattias Ekström, who ranked second at the DTM with Audi's RS 5 ; followed by Mike Rockenfeller, who brought it to 72 points. Ekström and Rockenfeller's race cars are available under item numbers  5021400133 and 5024400123 prime examples of the high quality of Spark.

The production is of course favored by  the polyurethane casting resin because it is a lot easier  to bring small series quickly and economically to the market. Because  because of the many small splinters, spoilers and air intakes or outlets,the mold is very complex  in the construction of Formula 1 and touring cars. Look at the front of an RS 5 DTM exactly: The front spoiler is a rugged landscape full of air guide and brake cooling ducts; a labyrinth, created by professionals of aerodynamics and implemented to the model 1:43 of model engineers of  highest class. To reduce the radiator grille and the inner workings of the headlights correctly, on the other hand, is almost standard and hardly worth mentioning.


The lower half of the body made from resin  has it all: Plenty of air ducts and baffles  left and right above the sill  - even if they are made  more of carbon on the original. The models of Spark of course build in  the assemblies that are important for the management of airflow , located at the rear : The overly wide diffuser and the rear apron are evidence of much fine work of the engineers. The rear spoiler also  overlooks the car in the  back. In all models, the decals and logos are put in  the right spot.  The build quality of the miniatures is top: Finally, the label Spark has grown up with models to originals from the world of motorsport. So there is plenty of  experience. Also  the view of the interior is not disappointing.

Jamie Green to race at the Norisring in 2015


But now back to the Norisring 2015: Due to the success in the first 4 races of the current season, the 8  Audi RS 5 DTM have  additional weights on board at the Norisring . Audi has the heaviest cars on the grid. The highest weight has the racing car driven by Mike Rockenfeller and Edoardo Mortara, each with 1140 kilograms - 35 kilograms more than the lightest cars in the competition. And what does Jamie Green say  to the Norisring? "With 3 victories in the first 4 races a  I managed dream start this season. Now the Norisring, one of my favorite tracks, where I manage very well. Of course it will not be  easy, because we have a lot of extra weight.  But the RS 5 DTM fits perfectly to my driving style this year so  that we should still be able to fight for victory. "

[24.06.2015] Lamborghini Veneno by Kyosho and AutoArt in comparison