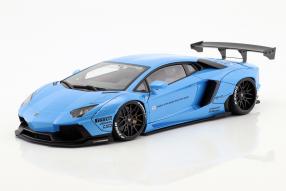 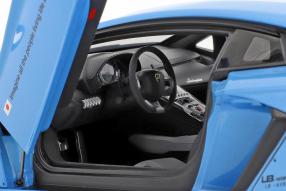 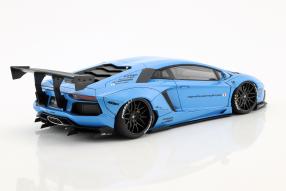 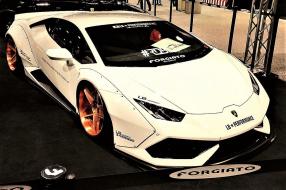 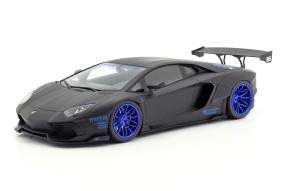 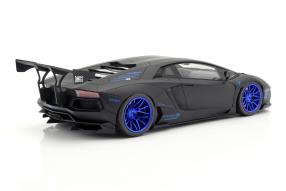 We already started the coming weekend with yesterday's report on the Formula E race in Santiago, but in our reading recommendation for Saturday and Sunday we let the Lamborghini and Nissan inspire us, which have visited the tuning company LB works / Liberty Walk. In addition to the well-known miniatures based on the role models from the prefecture Aichi, we have a new addition to our range: the Lamborghini Aventador from 2017, for which GT Spiritmodels is presenting a large model in scale 1:12; limited to only 199 units, available under item number GTS12502BK in the color combination matt black / blue and made of the high-quality polyurethane resin. The demand for the modelcars that relate to the prototypes of LB works is huge: Our inventories are rapidly declining from those made by Autoart.

GT-Spirit presents us with the model of the Lamborghini Aventador 2017 a miniature with very fat, wide cheeks; the wide construction, which belongs to the philosophy of the Japanese tuning company Liberty Walk / LB Performance / LB works. The cars aren't just tuned or pimped; the works style of its founder and today's president Wataru Kato - also known as Shakotan Koyaji - is the work of a car manufacturer that produces individual pieces for its customers. Wataru Kato started the Liberty Walk in 1993 in Nagoya, Japan, at the age of 25, to build cars in the so-called Bosozoku-style. The tin snips are obviously the best friend of the professionals of the company from the prefecture Aichi, which was founded in 2008 in its current form, because the interventions go as far as changing wheel arches and the supporting structure.

The prefecture Aichi is considered as the fourth largest in the state and is not far from the center of the Japanese island chain. It all started with the so-called Kaido-Racers: cars whose bumpers were removed, whose metal parts were cut to size at that time and which gave them a new look by installing headlights from mostly older vehicles. LB Works has adapted this old school / Bosozoku-style to the best automobiles in the world! According to the company, that was the concept behind LB-Works. In 2008, Wataru Kato rebuilt a Lamborghini Murciélago for a friend: wider and therefore even cooler than the original versino from the understanding of the gentlemen. The car was finished in 2009 and found its way to the SEMA tuning fair in Las Vegas. LB Performance was born.

However, according to the company, the positive response to this work did not lead to a clear entrepreneurial concept, which only emerged in 2012 with a second Murciélago. There was praise and criticism: praise for the courage to use such a hand on a super sports car with the radically attached tin snips and the riveted fenders; Criticism for the same reason. But the positive response prevailed, followed by converted Ferrari 458 Italia, Nissan GT-R and other vehicles or body kits. 200 of the cars are in Japan, another 350 and more are on the road around the world. The Works Style is also being expanded to include cheaper cars with the name LB Stance. Of course, the modelcars are also cheaper than the originals: Autoart - own spelling AUTOart - proves to be particularly strong in its implementation!

Lamborghini Aventador from Autoart in 1:18

Because Autoart does not build the Lamborghinis of resine, but goes in full and relies on diecast, which leads to all around openable doors and better haptics. We offer the Lamborghini Aventador Liberty Walk LB-Works 2015 in 1:18 under the item number 79107 still in sky blue metallic, under 79105 in white as well as under 79106 in matt black painting. Liberty Walk endeavors to do things that no one else dares to try; the company has established its own way: "We wear the Japanese flag on our back with pride, because we want to spread our traditional car culture all over the world." We think it's mega and hope that this bacillus will also be transferred to you who want to carry the passion for cars like us deep down and in their hearts! In this sense, a great weekend!