For enthusiasts of the international motor sports, the two diecast-label Ivo and CMR offer very well made, inexpensive models to Ford and Audi in 1:43 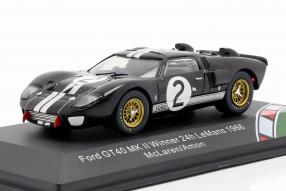 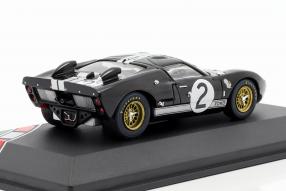 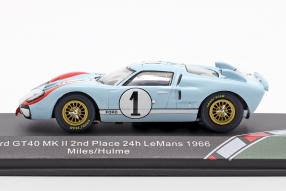 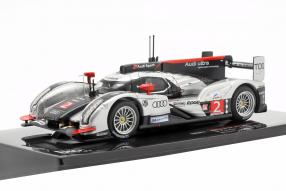 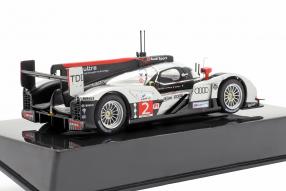 Three modelcars - one story: With the miniatures of the Ford GT40 with the starting numbers 1, 2 and 3, CMR fades back to the 24 Hours of Le Mans in 1966. The available models in the scale 1:43 are produced of diecast. Their role models are not only heroes of the racetrack, but also automotive protagonist in the movie "Le mans 66 - Against every chance" / "Ford v Ferrari", in which the focus is laid on the competition of the two car manufacturers Ford and Ferrari at the 34th Grand Prix d'Endurance les 24 Heures du Mans from June 18th to 19th, 1966, on the Circuit des 24 Heures. We have reported in detail in the article accessible via this link, but we would like to draw your attention once again to the models with the article numbers CMR43054, CMR43055 and CMR43053. Just like the Audi R18 from Ixo, which should also delight Le Mans fans.

Corresponding with the history and the film, CMR designed the line up of the very well crafted and yet surprisingly inexpensive modelcars: racing drivers Bruce McLaren and Chris Amon at the wheel of car number 2 gave the Shelby American Inc. team the overall victory in Le Mans in 1966. Ken Miles and Dennis Hulme achieved the second place with No. 1, while Ronnie Bucknum and Dick Hutcherson with No. 3 were ranked 18th. The 7.0 liter V8 has shown its potential as desired: Henry Ford II - played by actor Travy Letts - has taken over his grandfather's family business and wants to establish American cars in the market dominated by European manufacturers. What he did with the help of the young visionary Lee Iacocca (Jon Bernthal), the former champion and engineer Carroll Shelby (Matt Damon) and the GT40.

A story that definitely haunted the heads of those responsible at Audi, when they identified the ideal stage for their brand in Le Mans 1999. The diecast-modelcars by Ixo in the scale 1:43 remind us to the Audi R18, with which the people from Ingolstadt won the victory at the Sarthe in the years 2011, 2012 and 2013: 2011 it was the R18 TDI, with which the drivers Marcel Fässler, Andre Lotterer and Benoit Tréluyer got the overall win for the Audi Sport Team Joest. In 2012, the R18 as e-tron quattro with Tom Kristensen, Allan McNish as well as Loïc Duval went to the start and did not only achieve the top podium, but also won at the same time as the first Hybrid-racing car in Le Mans. The same cockpit-nomination also won in the year 2013, when the R18 was seen with a revised front and for the first time with double end plates, just like Toyota used it.

Similar to its predecessors, the R18 was powered by a 3.7 liter V6 TDI that produced 360 kW / 490 hp in 2013. Its electric motor contributed 2x 80 kW. The models reproduce the heroes of Le Mans exactly and are out of top quality, hardly inferior to the miniatures of more expensive manufacturers. Ixo has excellently implemented the look and decoration of the models in the scale 1:43, in which the 2011 version is available under the item number LM2011, the 2012 winner under the LM2012 and the 2013 winner under the LM2013. For the friends of the 24 Hours of Le Mans, which will take place this year on the weekend of June 13th and 14th in the 88th edition, these superbly made and inexpensive modelcars are an absolute must have.