With the fast sport estate car in the scale 1:18, GT Spiritmodels brings further models after the role models of the Audi tuner 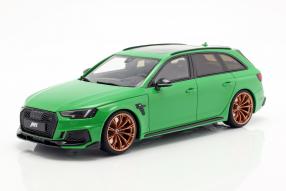 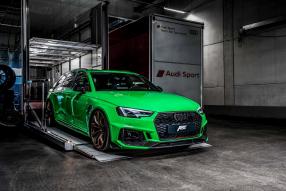 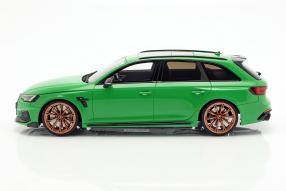 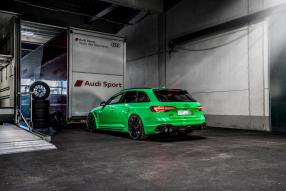 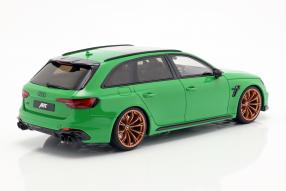 Was yesterday's start into the week a little too easy for you? With the Lanz Bulldog we actually have felt a little bit in chill-out-mode. It is logical that it cannot stay that way, so we dedicate ourselves todays the modelcars of the Audi RS4+ Avant, the fast estate car from the house of Abt in Kempten. The RS4+ was produced because of the high demand after the RS4-R, which edition of 50 units, according to the noble tuner, was not sufficient to meet demand. Our friends from GT Spiritmodels achieved the license for the production of the modelcar to the RS4+ Avant, of which Abt Sportsline has also scheduled 50 units, GT Spiritmodels however brings just 999 units in scale 1:18 in the color Viper green to the trade. The RS4+ was presented on the Geneva Motor Show last year. We take a closer look at the modelcars.

GT Spiritmodels has implemented the shaping of the Audi Avant perfectly into the model. Not only that the appearance of the miniature matches exactly the line management of the role model - no, also the detailing is outstanding from a handcraft perspective and the level of equipment offered. The finish of the radiator grill, the exposed fenders and the replica of the carbon parts on the modelcars arouse emotions: Awesome! We recognize what Abt Sportsline has developed in the Allgäu: Carbon parts as front lip, front blades, radiator grill border, roof spoiler as well as the rear apron can be traced at the miniature in 1:1. The installed thread springs in the RS4+ we have to think, but the gold 20 inch GR wheels enruse a beefy appearance on both the prototype and the model. The quad pipe exhaust with carbon tailpipes cover must not be missing.

The modelcars are made of high-quality cast resin. Doors and hoods remain closed as usual with this choice of materials. Therefore, we only have a look at the data sheet for a view under the bonnet: The biturbo V6 from the production version offers 331 kW / 450 hp. The so-called RS4+ package contains the additional control unit AEC developed by Abt, the use of which leads to an increase in output of 44 kW / 60 hp and 80 Newton meters (Nm) of maximum torque. This brings the RS4+ to 375 kW / 510 hp at 680 Nm, accelerates to 100 km / h in 3.9 seconds and reaches its top speed at 280 kilometers per hour. If that's not enough, the Abt Power S can also optionally increase the output to 390 kW / 530 hp. An Audi RS4 Avant costs around 80,900 euros; around 28,900 euros must be spent on the extras from Abt Sportsline.

Click here to the modelcars of the Abt Audi RS4+ Avant in 1:18