Three modelcars appear in scale 1:43 and out of die cast to the most successful S-Class of all times; one of them, however, as the newest exclusive model 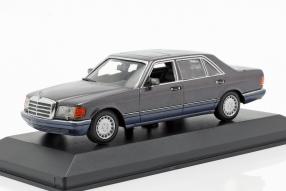 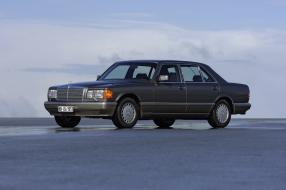 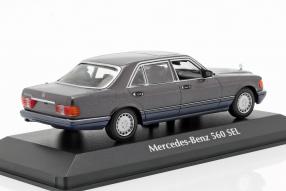 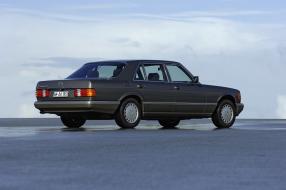 It is the long version of the Mercedes-Benz S-Class of the year 1990, which is created the from the house Minichamps originating label Maxichamps for the fans of the series W 126. The V 126 appears three times: Under the item number 940039300 painted black, under 940039301 in violett metallic and as a modelcar available only at ck-modelcars.de and modelissimo in a special edition of only 500 pieces in dark blue painting (943039303). The friends of Mercedes-Benz will be pleased about it, because the diecast miniatures score not only with a good build quality and harmonious proportions, but they also remind of one of the most successful cars, the brand has ever built with the star: A total of 892,123 vehicles in all body styles left the bands; including the 74,060 coupes SEC.

Maxichamps has decided for the reduction of the longest version, which has compared to the basic version a fourteen inches extended rear and thus more legroom. This version is factory-internally abbreviated V 126; is known from 1979 to 1991 and finally actually built to 1994 series under the name W 126. The nomenclature completes the two-door coupe as C 126. With the 560 SEL in scale 1:43 the fan acquires the miniatures of the most powerful edition of that sedan , which holds the record for the most-sold luxury car in this segment to date. A 560 SEL of the year of construction 1990 had a V8 under the hood, which provided with catalytic converter 205 kW / 279 hp and without Kat whopping 220 kW / 300 hp. However, the hood remains closed in the miniatures as usual in this size.

At that time, you could not rely on model names: The eight-cylinder M117 series had approximate 5.6 liter capacity and delivered in 1990 a maximum torque of 455 or 430 Newton meters (Nm) to the rear-wheel drive. With catalyst, a V 126 reached 242 km / h top speed; without it 250. From zero to 100 accelerated the exhaust-purified version in 7.2 seconds, the unpolluted in 6.9. It was exclusively shifted by automatic transmission. A total of 75,071 cars of the 560 SEL had been built. Designer Bruno Sacco has set a memorial with the timeless lines of the W 126 / V 126: Even today, the side crash barriers are named after him, which also adorns or protects the vehicles of the W 124 and W 201 series.

Today the S-Class is a wanted youngtimer and the models to it still just as popular.

Here: Click to the new S-Class V 126 from Maxichamps