22.07.2019In focus and unforgotten: Michael Schumacher

Even seven years after his retirement, the seven-time world champion is still a topic: especially with regard to the next weekend 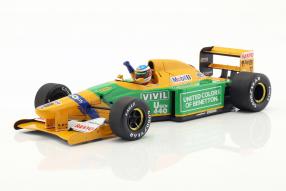 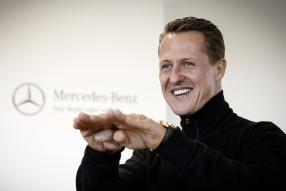 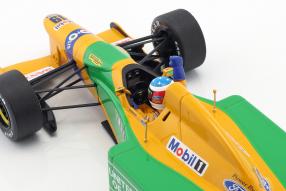 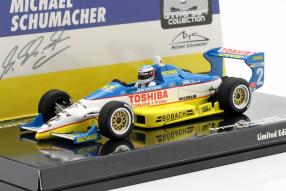 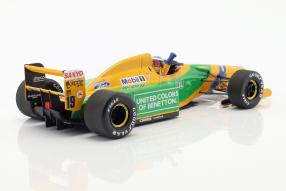 With almost certianly probability, Michael Schumacher would be in Hockenheim next weekend, when the German Gran Prix takes place there. After his retirement in 2012 no longer engaging in racing, of course, but probably sitting in a demo round in some more or less historic racing car. Unfortunately, fate did not go well with the Kerpener, who has had to deal with its serious consequences since his heavy skiing accident in 2013. Especially in the week before the Grand Prix of Germany, his home race, comes in one or the other motorsport fan melancholy to the fact that he can not be there. And this undiminished concern, the constant thinking of the greatest German motor sportsman at all leads to a great interest in his cars.

A miniature to a racing car from the early days of the career of Michel Schumacher appeared now in the special packaging of the 25 anniversary collection, which is available exclusively at ck-modelcars.de: It is the Benetton Ford B192, with which the Kerpener finished 3rd in the Grand Prix of Italy in Monza in 1992. The modelcars of the Benetton, powered by a 3.5-liter Ford Cosworth V8, are available in size 1:18 and under the item number 113920219, come from the proven production of Minichamps and are limited to just scarce 300 units. Of course, the models made out of die-cast zinc or diecast provide a true-to-original cockpit reproduction and driver figure. The decals to complete the decoration are included in the model replicating in detail miniatures.

Let's take a look back: 1992, this was the second year of the 1969 born in Hürth, later seven times world champion in Formula 1; his first full year at Benetton with Martin Brundle as teammates and with the stars Nigel Mansell on Williams-Renault and Ayrton Senna on McLaren-Honda. In the same season Schumacher won by the way his first Grand Prix in the Belgian Spa, for which Minichamps also offers modelcars (110920019). In addition to these, currently brand new miniatures of the Reynard-Spiess F893 appeared with which the ONS young team from WTS Racing helped Schumacher to achieve the 3rd place of the German Formula 3 championship in 1989. These resine models are limited to 600 pieces in scale 1:43 and are availabel under the number 517894302. Other novelties have the Reynard F903 as a model.

This makes one thing clear: the modelcar manufacturers don't have forgotten Michael Schumacher, as his fans. On the ever-new and quickly sold-out miniatures can be read that the friends of the two-time father and record holder unreservedly keep faith with him: Seven World Championship titles in Formula 1, 91 victories, 155 podium finishes and 77 fastest laps. His record of 68 pole positions was surpassed in September 2017 by the Englishman Lewis Hamilton, and he is going to compete in the Silver Arrow also this weekend in Hockenheim as the leader in the drivers' standings. Of course, this blog can not look to the future, but we bet that not a few visitors to the Hockenheimring remember Michael Schumacher.

And going to speak about him: Hashtag #KeepFightingMichael!

Here: Click to the new models to Michael Schumacher