An elaborate diecast-miniature to the model series G29 appears in scale 1:18, the latest generation of the roadster, which arised through the cooperation with Toyota 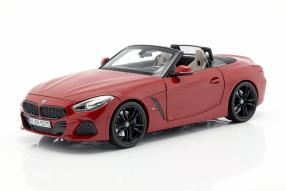 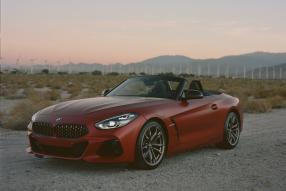 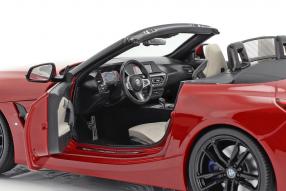 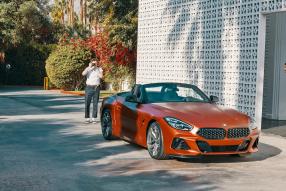 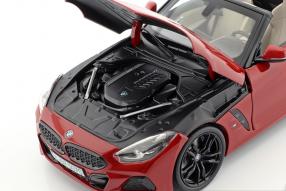 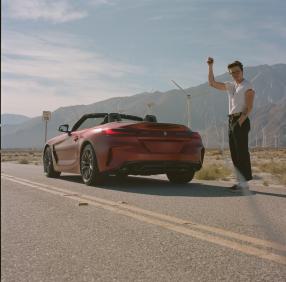 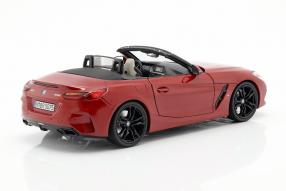 In the color San-Francisco-Red appears the modelcar of the latest generation of the BMW Z4 in scale 1:18 under the item number 80432450998. The French from Norev got the license for the rebuilt of the open two-seater, which arised in the model designation G29 through the cooperation with the Japanese car manufacturer Toyota. Therefore, the third generation of the BMW Z4 shared the CLAR base with the only available as a coupe Toyota GR Supra A90 series. The non-visible parts on the outside of the body as the bottom plate, inner parts of the wheel arches, bulkhead, front side members and the electronics architecture and others, the eye in direct contact initially hidden components such as parts of the chassis, tank, exhaust system and heating make it possible to carry out such cooperations.

Because roadsters and sports coupes come in the number of limousines and compact cars. If the sporty variants do not share their platforms with the two- or four-door cars, other ways must be find: At BMW and Toyota, this led to the fact that the basis for two athletes developed together and made one version of a roadster and the other one closed appearance. In the case of BMW, the result is a visually very harmonious vehicle: the G29, with its design, which is the responsibility of Calvin Luk, fits very well with the current design language of the Bavarians. Norev has managed to transfer its lines perfectly to diecast modelcars that open the bonnet and doors. The boot lid stays closed, but apart from a cave, there would be nothing to see anyway.

Since a look under the hood in the model as well at the role model has more to offer: Two four- and a six-cylinder come to the installation. With the help of Valvetronic, twin-scroll turbocharger and direct injection as sDrive20i and sDrive30i, the 2.0-liter in-line four-cylinder deliver 145 kW / 197 hp and 190 kW / 258 hp. The model of the M40i - the role model for our model - with approximately 3.0 liters capacity offers its buyers the pleasure of having more than 250 kW / 340 hp. The engines develop a maximum torque of 320, 400 and 500 Newton meters (Nm) and are switched by eight-speed automatic transmission. The sDrive20i can be ordered with a six-speed manual transmission since July. From zero to 100 km / h, the rear-wheel drive units are respectively in 6.6, 5.4 and 4.5 seconds. The maximum speeds are 240 and 250.

BMW brought the new Z4 together with the young, avant-garde fashion photographer Brooklyn Beckham in the Coachella Valley at Palm Springs in Southern California. The photo shoot in the desert of Southern California was the first stop of a long-term collaboration in which new perspectives should be opened up when looking at current BMW models. With the eyes of a young generation and in the individual style of an always curious, ambitious and automotive-enthusiastic artist, Brooklyn Beckham - whose recordings already inspire a worldwide and steadily growing fan base - sets an authentic scene for his motifs. No doubt: The new BMW Z4 has also hit a nerve at Brooklyn Beckham: "Cool and dangerous" it looks like for the young photographer - even more, "the craziest car I've ever seen".