A beautiful model car in the 1:18 scale recalls one of the most successful Formula One cars ever known to motorsport. 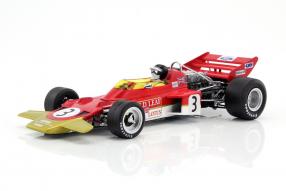 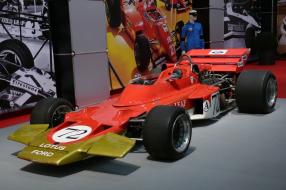 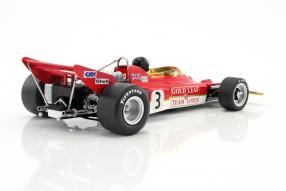 Lately, we have written the one or more blogs about Stefan Bellof, but today's Throwback Thursday, we would like to dedicate to another racing legend from Germany: Jochen Rindt has driven under license from Austria during his career, but as a native of Mainz, he falls in line as one of the Formula One drivers that come from the German-speaking area. The reason we are interested in Jochen Rindt today are the new Modellautos of the label "Quartzo Gold Leaf Team Lotus", which converted Rindt's driven car Lotus 72 from the year 1970 into the 1:18 scale. The comparatively cheap model car is limited to 3,000 units and is available in the decoration of the Grand Prix of Spain under the item number 18273 with driver figure.

From 1964 to 1970, Jochen Rindt took part in the so-called "Automobile World Championship", as the Formula 1 was still called at the time. Rindt was the son of a Hamburg couple, who had a spice mill there. In 1943 it died in a bomb attack, which brought young Jochen to his grandparents to Austria. In 1961, he started his career as a motor sportsman on a Simca, came into contact with Formula racing cars and was supported by Ford with a Formula 2 Brabham-Cosworth from 1964. In 1965 he won the 24 Hours of Le Mans on a Ferrari 275LM. In 1968, he joined Colin Chapman's Team Lotus in Formula One. 1969 was not such a good season, but 1970 the team with the Lotus 72, with which Rindt won five races. During the training in Monza, he was deadly injured, but despite a good point, he became world champion.

One of the most successful Formula One cars

The Lotus 72 won 20 victories in the 75 races in which he was deployed. In 1972 both world championships were held for the two titles in 1970, and in 1973 also the design engineers. Designed by Colin Chapman and Maurice Philippe, the Lotus 72 was used until 1975, winning three major awards as the Lotus 72E. A great template, the Quartzo with a handy very well done model worthy. The finest detail: the exposed engine, which reveals all the subtleties of a drive set undetected. What is no longer present in today's Formula 1. For this purpose: transmission and suspension parts on the silo tray. The model built from zinc die-cast is not only reminiscent of the legend Rindt, but also one of the most successful Formula 1 cars ever.