The open two-seater from Bavaria is one of the milestones in automotive engineering. Minichamps delivers a red version in 1:18. 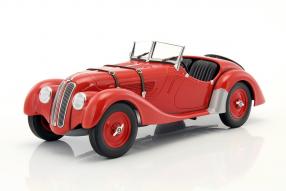 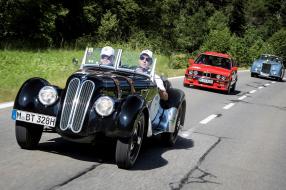 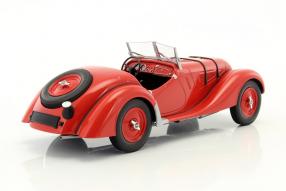 With only a limited 504 pcs. the Aachener label, Minichamps delivers a Bmw 328 in red lack. The model car, made from zinc die-casting, is one of the most famous roadster we know from the pre-war era. Just under 80 years after its debut, the BMW 328 still embodies the pure passion for sporty driving and racing on the racetrack for many fans. The open Zweisitzer debuted in June 1936 - not at an automobile exhibition, but at the Eifelrennen at the Nürburgring, where he scored the fastest time. Ernst Jakob Henne, with an average of 101.6 kilometers per hour, won the class of sports cars up to 2000 cm³ without a compressor. It should not remain the only success of the dream sports car.

The success factors that gave the BMW 328 the overall victory at the Mille Miglia in 1940 were consequent lightweight design, ideal weight distribution, aerodynamic lines, optimum engine performance and perfect road conditions. Until the 1950s, the BMW 328 secured numerous titles in motorsports. The car was able to celebrate with the fans at the Silvretta Classic Rally 2015, for which we have secured a photo for you: it shows a copy of the roadster built in the opening year 1936. With its 59 kW / 80 hp straight-six-cylinder engine and an empty weight of 780 kilograms, the BMW 328 still provides ideal conditions for fast-paced driving pleasure. The car, of which only 464 units were built within five years, is the most successful sports car in the 1930s.

BMW sees the 328 as a milestone in the history of the automobile manufacturer and hits the nail on the head with the statement that the roadster is a coveted rarity among fans and collectors of historical vehicles. They will look forward to the new models from Minichamps, which, as usual, look exactly at the look of the pototype and devote themselves to every detail meticulously. The doors and hoods remain closed, but the straps above the bonnet, as well as the watch collection in the barren, well-hit and open cockpit. The front wheels are steerable. The model of the historic 328 is available under item number 155025031; Under 155025030 it is in silver lacquer in the portfolio of the Aachener. A dream car - in the original as in the 1:18 format and at a comparatively low price.