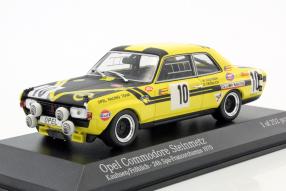 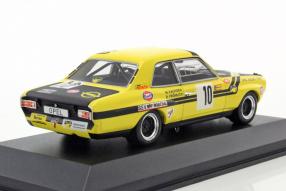 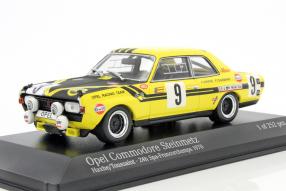 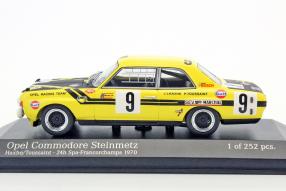 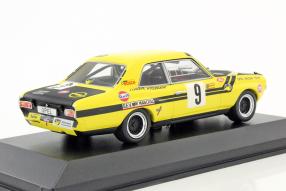 Some things you want at a time when you just cann't get them, because they simply do not exist and you do not know of them: Some fans of the 24 hours of Spa would certainly have been a model car of the Opel Commodore A in the Finish in which Minichamps delivered it in two versions limited to 252 units three days before the current reissue of the race weekend. But in 1970, the year from which the model came, the model car was by far not as far as today, so the friends of the circuit in the Ardennes hardly knew what was going on and what would be possible 37 years later. From zinc diecasting the Aachen miniatures have produced a scale 1:43 of a spectacular racing car, which we want to look at in this blog article.

The model for the model started at the 24 hours of Spa-Francorchamps in 1970 and was made by the team Steinmetz for the drivers Willy Kauhsen and Dieter Fröhlich as well as in the sister car for the driver pairing Jean-Louis Haxhe and Philippe Toussaint. Minichamps has made very detailed models, which the collectors can purchase under the item numbers 400704600 and 400704609 respectively. Doors and hoods remain closed for both Diecast models unfortunately, but we already know that in this size. At the time, Opel built a special version of the Commodore A for the customers, which differed significantly from the standard vehicle and was meant to be the basis for the work of the motivated motor sport enthusiasts. The price for this base vehicle was then 45,000 DM.

The tuners were given a two-door sedan with a narrow-stepped sports transmission, a direct-gear steering, differential lock, front seats, bonnet and luggage compartment cover made of fiberglass reinforced plastic Manufactured windshield. By the factory, the rear and side windows were made of Plexiglass, the fender extensions made of GRP. Opel also painted the trim and add-on parts directly from the scope of delivery as did the heating, only the corner trim strips were still mounted. Everything else was left to the tuners, such as Steinmetz. This fitted the Commodore a sports suspension with shorter springs, other suspension grommets and tougher dampers, the appropriate application adapted axle ratios as well as corresponding internally ventilated racing brakes.

A so-called rear axle wattage rod has also been installed: the wattage rod gives the rear axle a very exact and stable guide; A displacement is thus almost completely prevented. The added fender extensions offered space for wider rims and tires. To do this: A 120-liter tank, a front axle support and the roll cage. The engine of the Steinmetz Commodore A 3000 GS Group II came from the Opel captain, Admiral and Diplomat and brought out its 2,784 cubic centimeters displacement 184 kW / 250 HP. The maximum torque was given at 305 Newtonmeters (Nm) at 6,100 revolutions per minute. The six-cylinder system was supplied with a mixture of three Weber double-flat gasifiers; Operated by a five-speed gearbox.

The acceleration from 0 to 100 kilometers per hour: 5.3 seconds. The power weight: 3.5 kg per horsepower. Minichamps has converted all the modifications of the Opel Commodore A from the series to the motorsport in the usual quality in the scale 1:43. The shape and look of the Opel is exactly the same as the design of the model. Particularly beautiful is the reproduction of the front with the additional headlights, the detailed after-painted grill and the small auxiliary cooler has become. The interior was designed as a Spartan model. In conclusion, the article concludes with the recommendation to all Opel fans to put this wonderful model car into the shelves, which reminds with thorough work of the times, to which Opel built impressive, great cars for road and racing.