Now dressed in the ivory-colored taxi, previously as a police car and civilian version, Minichamps recalls a legendary slogan and the vehicle. 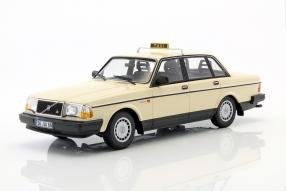 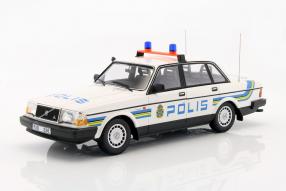 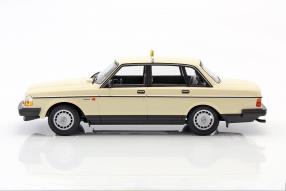 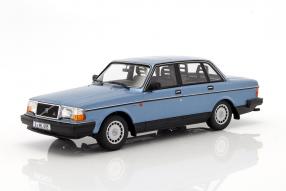 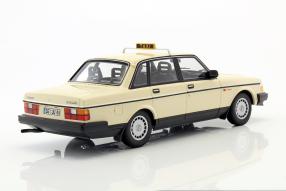 Safety from Sweedish steel - there is only one car manufacturer worldwide who has written both an advertising and a car history with such a catchy and credible claim. Minichamps has recalled it and with the Modellautos of the Volvo 240 GL 1986 exactly those vehicles were reduced, which are connected with their massive bumpers particularly with the advertising slogan. In a civilian version, in the police variant Sweden as well as in the now published taxia issue, the cleanly processed model car has appeared so far; Made of zinc die-casting, but unfortunately with closed doors and hoods. The last tax-exempt version of the truck is limited to 300 copies, just like the police car, and will be out of print like the other two versions.

Even 17 years after its launch in the American market, the Volvo 240 was designated by the American Insurance Institute IIHS (Insurance Institute for Highway Safety) as the safest vehicle on the market in 1991. The volvo model from Volvo was popular as a sedan in the USA; In Germany it was rather the Kombi. The Volvo 240 GL, as Minichamps used it as the model for his model, was the basic variant of the Viertürer, because the sound-like letter combination GL was reduced 1978 to the basic equipment. The model year 1986 brought Bosch LH-Jetronic and three-way catalytic converter with Lambda probe into the Volvo 240. In the USA, the series 200 was delivered since 1977 with catalyst and Lambdasonde and made the Autobauer at that time a pioneer in the field of exhaust gas cleaning ,

In a contemporary blue livery and a 1:18 scale, the Aacheners set up a sedan model car, which was limited to 504 units under item number 155171404. The limited edition has excellent details, an engraving for a steel sliding roof and the typical safety head rests in the interior at that time. As a miniature, the Youngtimer also defines itself as a representative of the philosophy of more passive active safety, which is expressed in a look which, in its felt monstrosity, completely stands out from the former limousines à la Mercedes-Benz W 124 and W 126 and underlined the bumpers becomes. At that time a Volvo was like no other car for safety, but also - and far more than today - a very special individuality.

The models in the check

The 240, 242, 244 and 245 series were manufactured between August 1974 and May 1993; Driven by a four-cylinder petrol engine with 85 kW / 113 hp from 2.4 liters displacement or alternatively the 2.4-liter six-cylinder diesel with a power of 60 kW / 82 hp. No matter whether it is a civilian version or the models of police cars (155171490) and taxis (155171494), the models are made with their well - designed optics, along with carefully engineered headlights as well as the associated wipers, the carefully defined radiator grille, the dull black rubberized bumpers and the Matching spoiler lip is a really good figure. The look of the miniatures fits perfectly with the models.

The finish of the parts as well as the fitting of the taillights made of transparent, correctly dyed plastic is what makes it. Minichamps again attests that the copies of the rim and tailpipes of the exhaust system, the imprints, the processing quality of the paintwork and the chrome frame of the immaculately sitting glazing are one of the model league's league league. The shaping of the faucet panel, center console, instrument carriers, as well as the seats and door panels, formally corresponded to the state of the autobahn of the 1980s; Although in the model seems a bit austere, but nevertheless interpreted coherently. With the miniatures of the Volvo 240 GL, Minichamps creates a collection, which is further expanded with police cars to Belgium and Norway. And it radiates the same solidity as it once gave the unforgotten slogan.