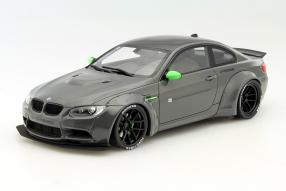 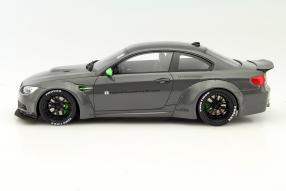 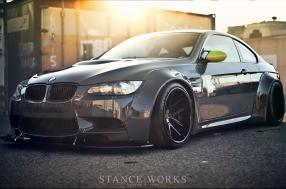 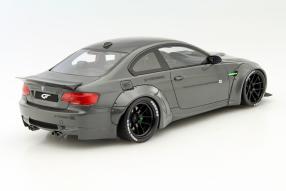 We started the week with the Alfa Romeo Giulia from 1966, but after the rather leisurely Monday, we are again looking for more power. So let's take a look at a BMW of the 3 series, the M3 from 1992, but does not look like an E92 normally leaves the bands: GT-Spirit presents us with the model of this blog contribution a miniature with quite fat, Wide cheeks; The Breitbau, which belongs to the philosophy of the Japanese tuning forge Liberty Walk / LB Performance. The cars are not simply tuned or muffled; The works style of his inventor and today's president Wataru Kato - also known as Shakotan Koyaji - is a work of a car manufacturer who produces individual pieces for his customers.

Who is Liberty Walk / LB Performance?

The heart of the company, founded in 2008, is located in the prefecture of Aichi, which is the fourth largest state and is located near the center of the Japanese island chain. It all began with the so-called Kaido-Racers: cars, their bumpers were removed, their parts were cut again and a new look was given to them by the installation of headlights of older vehicles. LB Works has adopted this Old School / Bosozoku style and has adapted it to the best cars in the world! According to the company, this was the concept behind LB-Works. In 2008, Wataru Kato built a Lamborghini Murciélago for a friend: broader and thus, from the understanding of the gentlemen, even cooler than the origin. The car was finished in 2009 and found the way to the tuning fair SEMA in Las Vegas.

This was the birth of LB Performance. But the positive response to this work has not yet led to the clear entrepreneurial concept, which emerged only in 2012 with a second Murciélago. There was praise and criticism: praise for the courage to put such a hand on a super sports car with the radically mounted metal shears and the riveted fenders; Criticism for the same reason. But the positive response prevailed, and it was followed by a rebuilt Ferrari 458 Italia, Nissan GT-R and other vehicles and body kits. 200 of the cars are in Japan, another 350 and more are distributed around the world. The Works-Style is also being developed with the name LB Stance for cheaper cars; As with the BMW M3. Liberty Walk tries to do things that no one else dares to try; The company has found its own way.

The Model car in the assessment

"We carry the Japanese flag on our back with much pride as we want to spread our traditional autoculture around the world". And this flag is also on the model car of GT-Spirit. The model perfectly follows the lines of the Breitbau BMW; The look is absolutely identical with the cars on the photos we know. On 2,000 pieces, the model car is limited worldwide; From Diecast it would not have been possible to transfer such a tuning plant to 1:18 - too expensive. Resine plastic places less demands on mold making, is more cost-effective and leads to the fact that we can only buy modellautos like these 3s at a reasonable price. And, as the three-day-old video shows: There's still a lot to come! We are looking forward to it: We love Liberty Walk!