New miniatures of GT-Spirit exclusively at Ck-modelcars and Modelissimo, whose prototype set a record at the Nürburgring. 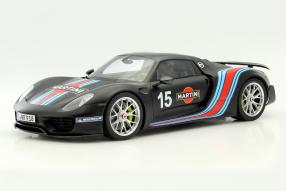 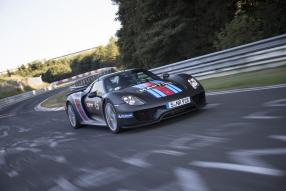 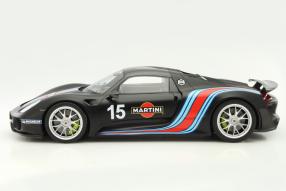 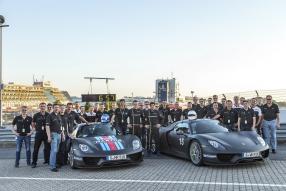 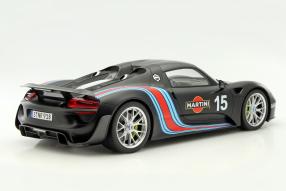 The Modellautos of the Porsche 918 Spyder in the 1:12 size range, which the two dealers Modelissimo and Ck-modelcars in cooperation with GT-Spirit have made, are limited to only 500 models worldwide: the model is the exact 918, in which Marc Lieb set the track record for series-produced vehicles with road-compatible tires on the Nürburgring-Nordschleife, in which he orbited the Green Hell in 6.57 minutes on the 04th In September 2013. A model of the top class and with a length of 38.7 centimeters showing a format in which it is recommended as an eyecatcher even outside large collections. As is the case with GT-Spirit, surfaces and imprinting of the Resine plastic model are of the very best quality. Let's take a look at the details.

The model of the matte black prototype in the look of the team Martini Racing Porsche carries the starting number 23 and the official license plate number 918. The look is perfectly matched with that of the model; The glazing sits, the headlights fit flawlessly into the car body and the prints can not be made better. Interior mirrors, the design of the faucet panel, the seat shells, the mid-range interior, typical Porsche center console, as well as the door linings and harness straps were meticulously replicated by GT-Spirit and the dealer partners. Doors and hoods unfortunately remain closed. For this, a little bit of the view through the ten-spoke rims compensates for the brake system, which is reduced in size and fitted with perforated brake discs.

This is clearly visible in the jewel of the model building through the rim star. The tires and the decor are also exemplary. The rounded curves of the diffuser and the bonnet above it were reproduced as well; Know-how grill grids are just as insignificant as the side turn signal inserts in orange, transparent plastic and a wiper on the gap-free sitting windshield. But what would be an article in our blog without a look at the key data of the model? This is the successor to the Porsche Carrera GT and has a hybrid concept as a drive. The Porsche 918 - now no longer in production - is powered by a V8 engine with 4.6 liters of displacement with 450 kW or 608 hp, based on the 3.4-liter engine of the Porsche RS Spyder.

Technical subtleties but also from the prototype

In addition, the vehicle has received electric motors on the front and rear axles that deliver 210 kW. The electric all-wheel drive with torque vectoring makes it possible to ride purely electrically up to a range of 25 kilometers. By recuperation, the brake energy recovery energy is transferred to the nearly 100 kilogram lithium-ion accumulator, which is located between the tank and the engine. The body is built like a high-performance motor sport of the Formula 1 as well as the prototypes à la Le Mans as a modular structure with a monocoque of CFK. The force is transmitted via a double clutch transmission. The model - not in the model. But this rarity has nevertheless put a record start into the heart of the blogger and is recommended as a valuable asset for fans with love for the special.