11.01.2017Exclusive model from ck-modelcars and Minichamps

With the McLaren-Honda MP4-31 and the driver Stoffel Vandoorne the two co-operation partners bring a model limited to 200 pieces in scale 1:18. 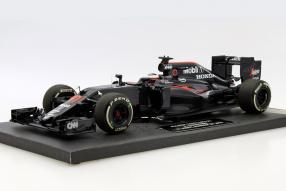 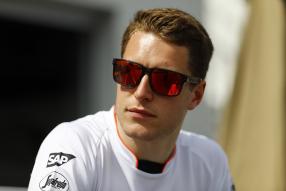 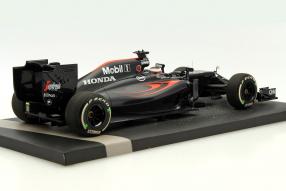 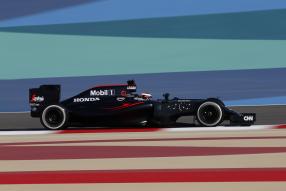 The list of the launch dates for this year's Formula 1 season is growing: In addition to the teams Mercedes-AMG F1 and the Scuderia Ferrari, which present their new racing cars on 23rd and 24th February 2017, now also call RenaultSportF1 and ForceIndiaF1 Data from their presentations: They show the brand-new racing cars on 21 and 22 February. His debut in Formula One, on the other hand, came from the Stoffel Vandoorne, who was born in March 1992. The motor sportsman from the Belgian town of Kortrijk started his career last year in the royal class, where he hired as a substitute driver at McLaren Bahrain in the MP4-31 instead of the injured GP pilot Fernando Alonso. Vandoorne got the 10th place straight away and got a point.

In the upcoming Formula One World Championship, he joins Alonso as a regular driver at McLaren-Honda, so he follows the retired Jenson Button. He chose the number 2 as his permanent starting number after he had used the substitute driver number 47 at his premiere in Bahrain. And this is exactly what we see on a really excellent model car that was produced in an edition of only 200 copies of Minichamps on behalf of ck-modelcars. The 1:18 scale model is made of Resine plastic and perfectly matches the last year's car. Including all antennas, wind deflectors and splinters as well as the Pirelli P-Zero tire. On board, of course, the corresponding driver's figure with helmet.

Stoffel Vandoorne and the Vita in small form

Vandoone started his motor sport career in Kartsport in 1998, at the age of 6 years. He entered the Formula Renault 2.0 Eurocup in 2011 and became champion there in 2012. In 2013, Vandoorne switched to the Renault 3.5 formula and became a complete exporter. In 2014 and 2015 he entered the GP2 series, where he won in 2015. In 2016 he drove to Honda in the Japanese Super Formula, ended up finishing as the best Honda rider in the 4th place and stretched the probes with a McLaren substitute driver after a race in the # F1. With the highly exclusive top-class model car of the McLaren MP4-31, the collector thus secures the first step of the Vita of Vandoorne at the top, which is certainly extended by many more entries and miniatures.