With high class crafted modelcars in scale 1:18, now the diecast label continues the work that was once interrupted 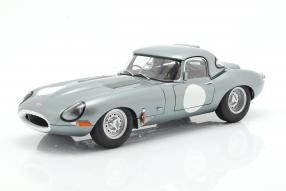 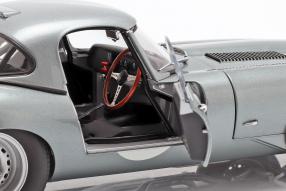 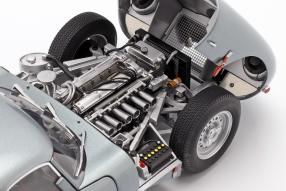 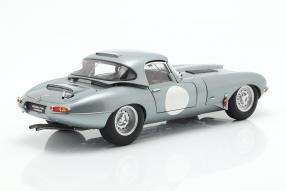 Autoart - ownspelling AUTOart - has recentley released new miniatures to the Jaguar Lightweight E-Type with removable roof under the item number 73646 and to this specified the model year of the role model 2015. Is that right? The Jaguar E-Type was just built in the years between 1961 and 1974. The British sports car, designed by designer Malcolm Sayer, was available at its time as coupe with closed roof and tailgate as well as a roadster and was successfully sold especially in the USA; for the moment with a 3.8 liter displacement offering six-cylinder, which produced 198 kW / 269 PS. With it, a top speed of 240 kilometers per hour were possible. Since these were also interesting values for motor sports enthusiasts, Jaguar began at the suggestion of John Coombs in late 1962 to construct the E-Type Lightweight.

And so we are at the role model for our model, which has not only appeared in the here presented silver and replicates the 1963 finished racing version. This was vastly different from the standard E-Type. So the body was not made of steel, but made of aluminum. A material that also replaced the cast iron of the engine block. In conjunction with the revised cylinder head from the 1955 D-Type and a higher compression, the power increased to about 235 kW / 320 PS with a curb weight of around 920 kilograms. Externally, the E-Type Lightweight corresponded to the E-Type Roadster, but if you look closely, you discover serious differences in the look. The vehicles were considered fast, but outstanding achievements in motorsport were denied them. Only two class victories in long distance races from 1963 to 1966 are known.

18 lightweights had been planned, but only 12 were built. And this leads us straight into the year 2015, where the remaining six lightweights, built in 1963, according to the original design plans were presented. Consequently, they received the chassis numbers 13 to 18 and appeared in the year in which the brand name Jaguar celebrated its 70th birthday. Today, they are the role models for the modelcars from Autoart, which know how to shine with fantastically executed details especially around the engine: engine block, cylinder head with intake, the radiator - these are highlights in model making, where the collectors can not get enough. The front wheels are movable; the front hinged bonnet, doors and boot are openable. The interior design perfectly recreates the sports car. Lightweights? Model-building-political are the heavyweights!