With the modellautos in Manhattan gray, glacier white and tango red, the second generation of the mid-class coupé has made it into the 1:43 scale 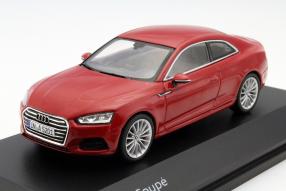 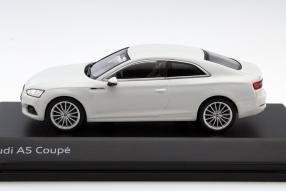 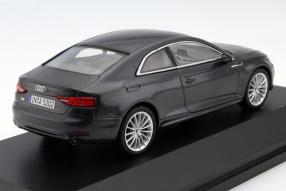 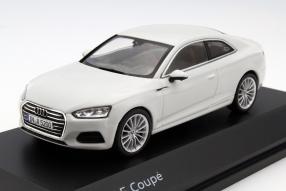 The brand new Audi A5 is not a big surprise when it comes to passersby, because it looks like its predecessor, built for nine years. Although the more flatter and wider, thus also masculine acting single-frame grille and the redesigned taillights are striking, but in the total appearance of the new A5 changes compared to the predecessor little. We like the more powerful bonnet, which by the indicated Powerdomes is almost threatening. The shoulder line maintains its waveform and thus gets the used-car value of the predecessor generation. A lot of news at the A5 is the friends of the brand but under the plate, because there are new assistance systems and, of course, new engines. This is not, but the new look is now also found in the modellautos.

View of the first miniatures

Spark and Audi rather than Schuco, according to the policy of the Ingolstädter at the new Audi A5. In the total body of the body, the model corresponds to the common expectations of the collectors. The large grill and the headlights are well hit, the glazing sits immaculately in the resin made of Resine plastic. The weakly engraved door handles are not the state of the things, the imitations of the light alloy rims the very first cream. The small exterior mirror housings and the chrome surround of the side windows also correspond to the current state of the model building technology. The taillights correspond to the finish of the front lights. Very well succeeded are faucet panel and interior panels of the doors. Measured by the overall impression, the price is favorable - even compared to the new advertising models from Mercedes-Benz or even Porsche.

Top model of the series and as a model not yet available is the Audi S5; The engine range of the new Audi A5 includes six drive sets. Audi is driving the Hashtag "So geht Coupé" and shows a car that its fans certainly will not disappoint. The design was gently further developed and received as mentioned at the beginning some accents in the area grill and bonnet. Genuine novelties bring Audi under the plate. The Audi A5 offers a completely new chassis in combination with a new electromechanical servo steering. Optionally, a chassis with dynamic steering and damper control is to be had. New in the A5 is the now well-known Virtual Cockpit, which comes as the A4 with an additional 8.3-inch monitor (MMI navigation plus) on the center console to the customer.

Many gimmicks under the sheet metal


In addition, the new Audi A5 is fully networked: WLan hotspots including LTE network as well as Apple CarPlay or Android car with inductive charging are available at extra charge. The Bang & Olufsen sound system with 19 loudspeakers and 755 watts is the perfect choice. Audi has also upgraded its assistance systems: Active lane assist, jamming, parking assistant, road maintenance assistant, evasive assistant and turn-off assistant are partly new or further developed. Each new A5 is to weigh up to 60 kilos less than its comparable predecessor. The range of engines ranges from 140 kW / 190 hp to 210 kW / 286 hp. But of these goodies the collector of a model in 1:43 unfortunately has nothing; Audi's friends, however, are able to keep their collection up-to-date with the model.