Shrunken, painted and eternally in the cockpit, or half naked and responsible for the car wash - a look at the driver figures and figures in the assortment 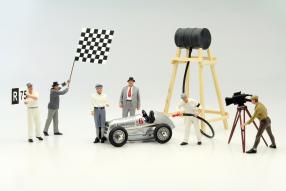 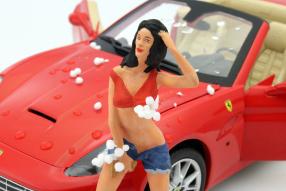 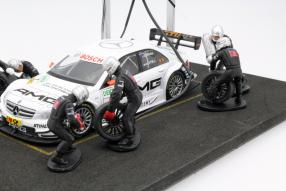 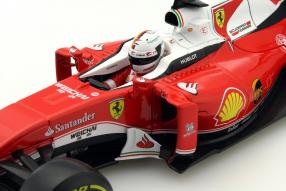 Well, were you frightened when you read the headline for this post? Your favorite model car dealer is supposed to trade with people? Right, so is it also: ck-modelcars acts with humans - however in the scale 1:43 and 1:18. Certainly, some of you will first have the car in mind when the new Mercedes-AMG Petronas F1 W06 or other racing cars are delivered, but besides the care with which the model car drivers imitate the vehicles, they also devote themselves to the driver figures, the time Of their lives - what a tragic fate - must sit almost clamped in the cockpit. Their helmets and racing jerseys are often slavishly imprinted exactly in the respective colors of the model and thus complement the racing car in question. But there is also less clothing on the body of our trading products.

People around the car - the salt in the soup

Last weekend, the Formula 1 started on the Circuit of the Americas, called #COTA for short. During the pit stops you could again watch numerous helping hands, whose work usually makes the drivers possible. A collection of racing cars, for example, is becoming more and more attractive if one or two of the vehicles are arranged on a stage and handled by mechanics. Altaya, for example, has designed a 1:43 scale crew that looks after the C-Class DTM from Paul di Resta; In addition to the appropriate rod for the chopper to change the tire. So arranged in the middle of a collection of racing cars is an eye-catcher, which is sure to lighten the arrangement of the parked vehicles. And with a tight ten for the characters not expensive.

Schuco has put on the market for the scale 1:18 a figures set Studio I with compressor on the market, which is somewhat more expensive with around 109.95 euro, whose figures however in the classical garment of the 1930er years along with matching film camera especially the fans of the silver arrows Should be expected. The models of CMC or Bauer in 1:18 fit well, the glorious time also the passenger car of this era. A thoughtful mechanic on a Formula 1 of Lotus - well, even if Lotus now became the workplace of Renault, do not break the worries, because the results are too bad. Very good, however, are the neutral figures of the figurines, which offer the thoughtful employee in various dyed overalls as well as the colleagues with the thumb-high gesture.

Crisp ladies at the #carwash

A real eye-catcher, however, should be the light-skinned ladies in the 1:18 scale, which the figure manufactory offers under the names of Karin and Steffi; Of the same size as their mechanic colleagues. Descriptive curves and tight pieces of clothing to the cheeky expressions of the face - this fits well with the tasks of the ladies, the washing of sports cars. The girls are also available in different designs and with a somewhat style-appropriate prepared ambience all around ensure a lot of attention in the showcases.

Just take a look at the entire range of the following link and get inspired to the design of your showcase!