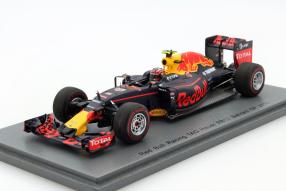 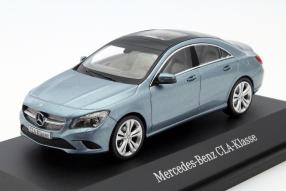 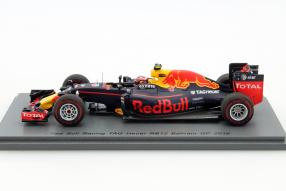 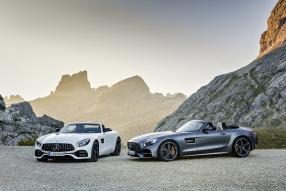 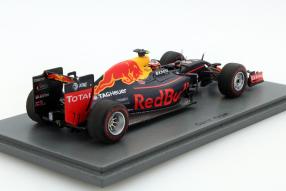 Weekend is coming up: time for family, friends, and model car - the Formula 1. Our heroes from the pinnacle of motorsport start Sunday's Singapore Grand Prix, the 15th race of the 67 Formula 1 World Championship. Lewis Hamilton leads with 250 points ahead of his teammate Nico Rosberg at Mercedes-AMG F1 with 248 meters and Daniel Ricciardo Red Bull with 161 dots the Drivers' World Championship standings. What we think about them? On one hand, the reference to the model car to Mercedes-Benz CLA, we could pull ashore to dream conditions for all fans of the brand with the star on the other hand, the great anticipation of the miniatures for Mercedes-AMG GT Roadster yesterday as GT and GT C has been presented.
New model car about Formula 1 2016
there is contrast of Spark and Red Bull.

On 19 July 2013, the first model car of the C 117 series came to the then-new Mercedes-Benz CLA on the market, to their production Schuco was licensed. This Fürth have found really great models in 1:43 scale to the wheels: Even at first glance falls on the flawless craftsmanship, which also applies to the finish of the die-cast zinc body as for painting in universe blue metallic, in which neither paint noses are still found dust inclusions. Spotless is the fit of the plastic parts such as the transparent executed missions for the headlights and the glazing. But the swinging styled taillights in transparent red plastic nestle without joints into the Diecast environment. No question, then, that the miniature of the CLA at the best large-scale models ever heard.

set with the Audi Q5 standards

This is not surprising, but Schuco has been dotted with numerous models, since it has moved with the Audi Q7 in 2005 the bar in terms of quality of workmanship and detailing a massive piece upwards. This hymn must not the SLS AMG missing 1:43 of course, the Schuco has open and closed smaller brilliantly. The CLA with the item number B66960129 you can watch currently provided in a showcase with a hefty discount: 24,95 € instead of 34,95 Euro.

the models for the Formula 1 2016 Spark are very low so not: The official car of Daniil Kvyat of Red Bull Racing reduced the team to Hugo Ripert to the state of the Bahrain Grand Prix; now sitting, as we know, Max Verstappen in this cockpit. The miniature of the overseen by Adrian Newey Red Bull RB12 met again to the last detail the requirements, ask the collector to a model of the premier class.

A real hammer for many model car display contrast of all: Mercedes-AMG yesterday the first images of the new Mercedes-AMG GT Roadster and GT C Roadster published, the convertible variant of the known since 2014 GT coupes. It is striking that the vehicles have separate bodies: the GT C carries the the not yet appeared as a model car compared to the base wider tail, but the long-awaited Mercedes-AMG GT R on display, while the GT Roadster the lines of the basic version follows.

A matter of Taste is that the Roadster the Panamericana grill bear as its premiere at SL in racing celebrated in the 1950s and the current GT3 and the facelift can be seen from the SL. We find: The face is the GT Roadster really good. So: Get ready for at least two model cars to roadsters. We can imagine that this will be presented together with the GT R on the Paris Motor Show later this month, have to but still no precise information. So once enjoying the upcoming weekend: Happy to and have fun at the race in Singapore!